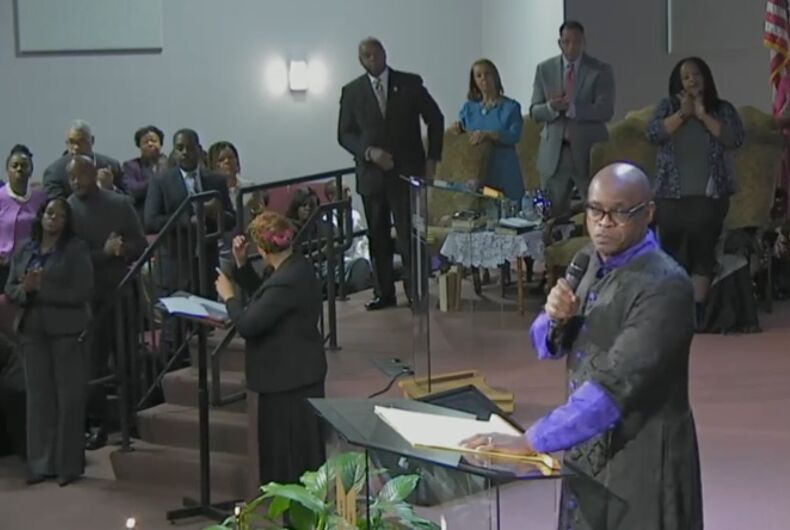 Pastor Dr. Maurice Watson of the Metropolitan Baptist Church did not give Vice-President Mike Pence the welcome he expected during Sunday’s service. And while the entire speech was broadcast live on Facebook, the congregation rose to their feet in applause as the Veep sat shame-faced in his seat.

Trump’s racist description of Haiti and African nations as “shithole countries” has spawned outrage and condemnation from around the world. While the President has denied using the term, Democratic Senator Dick Durbin and Republican Senator Lindsey Graham have confirmed the truth of news reports documenting the meeting.

The President reportedly said we should encourage people from Norway to immigrate instead.

“Members of this church are from Africa, are from Haiti,” the minister said in his sermon as he described Trump’s “shithole” comment as a “hurtful, dehumanizing, visceral, guttural, ugly adjective that I cannot repeat in church.”

I stand today as your pastor to vehemently denounce and reject such characterizations of the nations [unintelligable] and of our brothers and sisters in Haiti,” Watson continued. “And I further say, whoever made such a statement and whoever used such a visceral disrespectful dehumanizing adjective to characterize the nations of Africa, whoever… Do you hear me church?… whoever said it is wrong. And they ought to be held accountable.”

“We’re getting ready to celebrate Dr. King’s birthday. Lot of ways we can celebrate it – by worshipping like we are here today or attending an event,” Pastor Watson continued. “But I think the best way to honor Dr. King’s legacy is to speak up for and stand up for the values for which he spoke up and stood. And the main value that Dr, King stood for is the value of love. He said, ‘I decided to go with love because hate is too big a burden for any man to carry.’ There was nothing loving in that statement. Nothing loving.

The historically black church was established a year after the Emancipation Proclamation.

Pastor Watson's Statement on the President's Remarks on Haiti and Africa

I stand today as your Pastor to vehemently denounce and reject such characterizations of the nations of Africa and our brothers and sisters in Haiti.

Does your community live up to Martin Luther King’s dream?

Bea Arthur will make a cameo in Deadpool sequel?