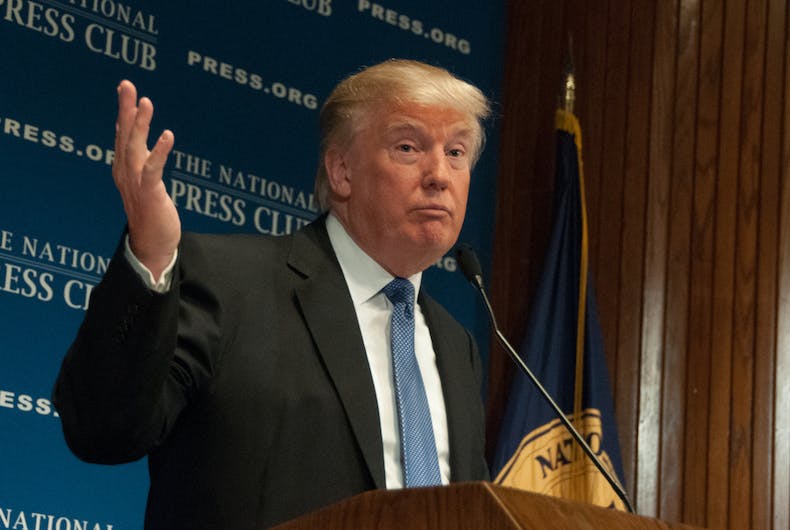 The Log Cabin Republicans have breathlessly announced that President Donald Trump sent them a note to congratulate them on their 40th anniversary. In the letter, Trump claims he supports LGBT rights, but within days his administration was making further assaults on LGBT rights.

“We are a Nation founded on the undeniable truth that all of us are created equal. We are equal in the eyes of our Creator. We are equal under the law. And we are all equal under our Constitution,” Trump says in the letter dated December 21 and signed by both the President and the First Lady.

“No matter the color of our skin or our sexual orientation, we all live under the same laws, salute the same great American flag, and are made in the image of the same Almighty God.”

Since the letter was sent:

The letter ends with, “As we write the next great chapter of our Nation, we reaffirm our commitment to these fundamental truths and will work to ensure that all Americans live in a country where they feel safe and where their opportunities are limitless.”

“Fundamental truths” have never been a strong point for Trump, but claiming LGBT people live in a country “where they feel safe” and “opportunities are limitless” while he attacks our community at every opportunity is a leap even for him.

But, hey. 40 years. Congratulations Log Cabin. This is what you have wrought. Enjoy the piece of paper.

Thank you to President Donald J. Trump and First Lady Melania Trump for your kind commemoration of Log Cabin Republicans…