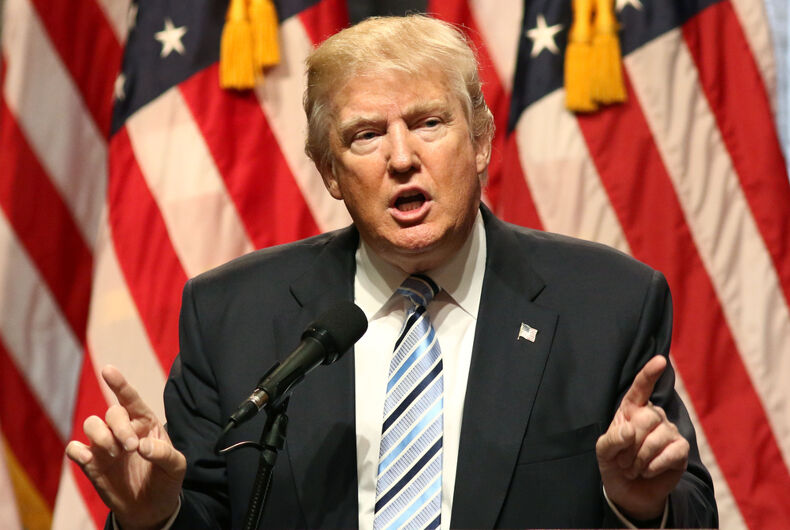 While President Donald Trump brought up job training, family leave, immigration policies, and prison reform during his State of the Union address before Congress, he only gave a brief nod to the one area where he has been the most effective.

The Trump administration has radically reshaped the federal judiciary as Republicans have rushed to stuff vacancies with unqualified far right ideologues after refusing to confirm former President Barack Obama’s nominees for years.

While Trump obligingly read a checklist of right wing “accomplishments” and wishlist items from a teleprompter, several organizations were reminding Americans to keep their eye on the ball. Trump is a masterful conman and shyster, but keep in mind that Republican senators are rubber stamping the President’s judicial nominees are in on the game.

“President Trump and his Administration have gone after LGBT people and other vulnerable communities with every weapon in his arsenal,” said Sharon McGowan, Director of Strategy at Lambda Legal. “To this end, the president has spent the last year packing the court with judges who look like him, think like him, and whose impact will stretch across generations.”

Related: America’s least qualified judge got confirmed by Republicans desperate for a ‘win’

“This Administration’s appointments to the federal bench are corroding our judicial system with nominees that are hostile to civil rights and the rule of law,” said NAACP Legal Defense and Education Fund Policy Director Todd A. Cox.

The biggest threat to the safety and future of America – the state of our union – isn’t North Korea, shithole countries, or Russia. It’s the willingness of one political party to give zealots and bigots the ability to shape law nationwide for decades to come.

“President Trump may tout his record on judicial nominations, but it’s not one he should be proud of,” said Kristine Lucius, Executive Vice President for Policy at The Leadership Conference on Civil and Human Rights.

“He and Leader McConnell have overly politicized the process, putting in place judges who lack the temperament and qualifications to serve fairly and without bias. The rubber stamping of judges who are handpicked by the ultra-conservative Heritage Foundation and Federalist Society will remake the courts in Trump’s image, but ultimately, the Constitution and we the people will suffer.”

Related: Trump wants an anti-gay Prop 8 lawyer to be a federal judge

“The Trump administration has been attacking transgender people in visible ways throughout its first year—rolling back guidance on how to treat trans students respectfully, banning open service by trans troops, and releasing a plan to promote discrimination by health care providers, just to name a few,” said Mara Keisling, Executive Director at the National Center for Transgender Equality (NCTE).

“But the President has also launched a more insidious attack—packing federal courts with unqualified, biased judges like Kyle Duncan and Matthew Kacsmaryk, who have both said that being transgender is a ‘delusion.’ How can we expect such people to make fair decisions when trans people walk into their courtrooms?”