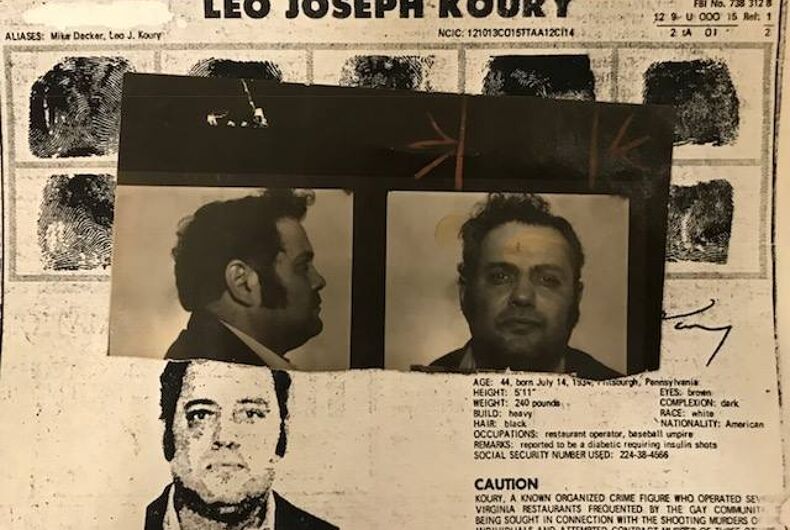 FBI wanted poster of Leo Koury. He was on the 10 Most Wanted list for 12 years.Photo: FBI

During the period between when Prohibition ended and the LGBTQ rights movement began to gain momentum, it was not uncommon for cities and states to have laws threatening the liquor licenses of those who would dare serve alcohol to queer people.

Virginia had several statutes concerning the sale of alcohol to those known or expected to be gay, enforced by the Alcohol Beverage Control Board (ABC), including:

A bar’s license may be suspended or revoked if the bar has become a meeting place and rendezvous for users of narcotics, drunks, homosexuals, prostitutes, pimps, panderers, gamblers or habitual law violaters.

It also prohibited employing such individuals:

[ABC] forbids a licensee from employing any person who has the general reputation as a prostitute, homosexual, panderer, gambler, habitual law violater, person of ill repute, user of or peddler of narcotics, or person who drinks to excess or a “B-girl.”

In spite of these restrictions, which were said to be most heavily enforced during the late 1960s, an area known as The Block, in Richmond, was home to a number of bars and venues where the LGBTQ community met openly; or as openly as was possible at the time.

As a result of the illegal nature of the businesses they were running, by serving and employing members of the LGBTQ community, a seedy element was often at play among those willing to own and operate such establishments, both in Virginia and elsewhere.

One such character was Leo Joseph Koury, a straight man who grew up in the restaurant industry, but who, as local CBS affiliate WTVR described him, “presented somewhat like a Jersey gangster, overweight and diabetic and – some say – diabolical.”

“Leo Koury was the Jack Ruby of Richmond,” said Ray Bentley, a retired promoter who was part owner of a gay club in the city, upon which his competitor soon set his sights.

Bentley said Koury owned a number of clubs, and had anyone who might be in a position to give him a hard time, such as the police or ABC officials, “under control so to speak.”

“He had a club down the street…called the 409 club,” he recalled. He remembered the place being “a dump.”

So he and his two partners decided to open up a competing place, but with nice accommodations. It worked, Bentley said, with people coming from as far away as New York City and Baltimore.

It rendered Koury’s club “a ghost town,” he said. Koury then tried to buy out Bentley’s share of the club, called the Cha Cha Club (Palace), but was rebuffed. He told him to think carefully about the decision, but Bentley stood his ground.

Someone shot a bullet through a window, and a bouncer they hired soon after was killed.

In 1978, Koury was indicted by a federal grand jury in connection with that murder, as well as a separate attack by an alleged hit man that left one man dead and two more wounded. Additionally, he was wanted for an abduction-for-ransom attempt of a local pharmaceutical heir, as well as other conspiracies.

He vanished before he could be locked up, and successfully went on the run until he walked into a San Diego police station in 1991 and promptly died of a brain hemorrhage. He had reportedly been living alone and nearly destitute in the city for years.

He had been on the FBI’s 10-most-wanted list for 12 years, and he was featured on the shows Unsolved Mysteries and America’s Most Wanted.

3 gay musicians just got fired from their Catholic church because, you know… gay