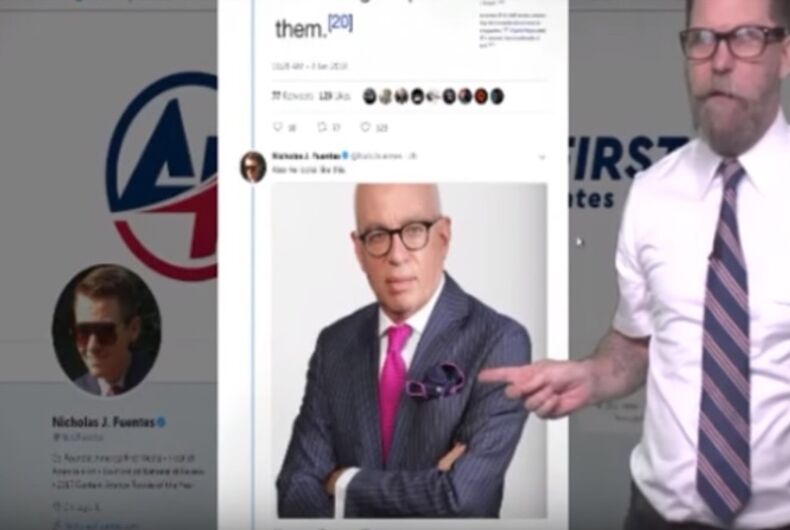 When nothing else works, blame the gayz.

As Michael Wolff’s blockbuster exposé, Fire and Fury, has taken the political world by storm with breathtaking allegations from inside the Trump White House, the right wing has furiously tried to debunk it. (FOX News, however, spent their air time focused on Hillary Clinton instead of covering the political controversy.)

But white supremacist and alt-right darling Gavin McInnes has a novel theory why the book should be discredited. He says Wolff has “gay face” and since he wore a pocket square during a recent interview, well, obviously Wolff is a closet case.

“Have you ever seen Michael Wolff? Now, this isn’t a fact, this is just my theory, but he has a gay face. And there’s nothing wrong with being gay, obviously. Chadwick Moore is a wonderful gay, so is Milo Yiannopoulos, but [Wolff] appears to be a closeted gay, and my experience with them is that they tend to be sociopaths. They have a lot of bottled-up sexual rage and they want revenge on the world. I don’t trust these stories.”

Yiannopoulos, an alt-right provocateur, and Moore, who “came out” as conservative after writing a puff piece about Yiannopoulos for Out Magazine, have become the darlings of the right lately. With Yiannopoulos’ star quickly descending, Moore has become the go-to-gay for right wing pundits like Tucker Carlson for his willingness to bash liberals, gay people, and social issues important to the community.

“Does that face look a little gay to you?” McInnes asks, pointing to a picture of Wolff in a Facebook video highlighted by Right Wing Watch. “I mean, it’s the lips. That kind of a pocket square, I wear it sometimes. I have slept with hundreds of women. So you have to either be a pimp or a pussy. Seriously, though. Look at his demeanor. Am I crazy? Does that look like a closeted gay man to you? Only black guys and me can get away with that kind of color scheme.”

“My gut kind of vibe is that this has to do with repressed homosexuality.”

A co-founder of VICE Media, McInnes was pushed out in 2008 and now hosts his own internet video series called Get Off My Lawn. The series was described as “a corrosive cornucopia of race-baiting, paranoia, performative outrage and woman-bashing” in a profile of McInnes published in The Globe and Mail.

The Advocate reports that McInnes also has a history of making transphobic comments.