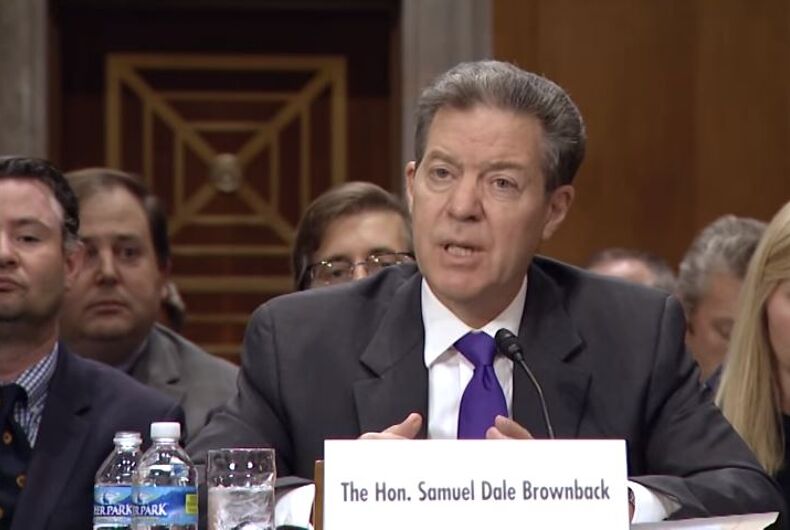 The vote was 49-49, with all Republicans voting to confirm and all Democrats voting against confirmation. Two Republican Senators were not present for the vote, and Mike Pence had to break the tie.

During the confirmation hearings, Brownback, who has a long history of anti-LGBTQ statements and policies, refused to make even the smallest commitment to supporting LGBTQ rights.

Sen. Tim Kaine (D-VA) asked Brownback why, as governor, he signed an executive order that rolled back employment protections for LGBTQ government employees that were put in place by the previous governor.

He said, “I believe these sort of issues should be passed by the legislative branch.” He did not explain why it was inappropriate to regulate the employment of government workers through executive order.

Of course, he never pushed the Kansas legislature do deal with the issue.

Kaine went on to ask Brownback whether there were any circumstances “under which criminalizing, imprisoning or executing people based on their LGBT status could be deemed acceptable because somebody asserts they are religiously motivated in doing so?”

He refused to answer the question, which Kaine had to repeat. In the end, Brownback said, “I don’t know what that would be, in what circumstance,” implying that there are circumstances in which executing people for being gay is acceptable.

Tom Witt of Equality Kansas opposed Brownback’s confirmation because he would use “religion as a weapon against people he doesn’t like.”

Witt would know. As governor, Brownback signed a law that allowed college clubs to discriminate against LGBT people and still get funding, as long as they claimed their homophobia was religious.

He also refused to follow Barack Obama’s guidelines to address transphobic discrimination in schools and signed a bill that made it more difficult for trans people in Kansas to update their birth certificates.

Before he became governor, Brownback was a U.S. Representative. He consistently opposed all LGBTQ legislation, even calling marriage equality “harmful to the future of the Republic.”

Ironically, Brownback – who is now in charge of promoting the rights of minority religions in other countries – was opposed by minority religions in this country. As governor, he signed a bill to keep Sharia law out of Kansas courts and ended Kansas’s participation in the Syrian refugee resettlement program, a program that actually promoted religious freedom by helping people who were being persecuted for their religious beliefs.

“Only under the Trump administration would someone so opposed to the constitutional rights of an American faith community be appointed to safeguarding international religious freedom,” said Robert McCaw of CAIR.

“Christians and religious minorities are suffering more persecution than at any time in history,” Liberty Counsel’s Mat Staver said, apparently forgetting that the Holocaust ever happened.

In a poll last July, Brownback tied with New Jersey’s Chris Christie for the lowest approval rating of any governor in the U.S.

Dennis Peron, the gay ‘Father of Medical Marijuana,’ passes away