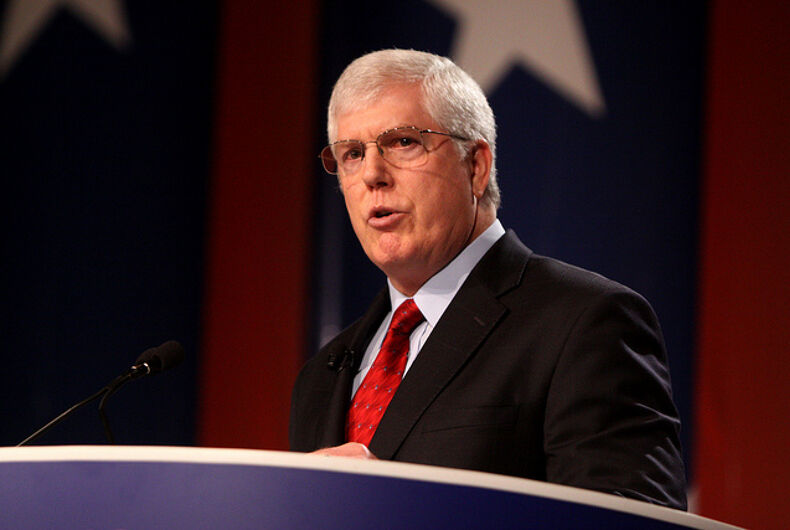 Mat Staver, head of the far-right legal group Liberty Counsel, has said that the problem with gay judges is that they cannot be expected to give fair rulings on issues related to LGBTQ rights and so-called “religious freedom.”

Staver, appearing on VCY America’s “Crosstalk” radio program late last week, was asked his opinion on the nomination of Andrew McDonald to serve as chief justice of the Connecticut Supreme Court.

If confirmed, McDonald will be the first openly gay chief justice on any state court in the country. The former state senator has been serving on the court since 2013.

“Where we are with something like that,” Staver began, “here’s the problem with it. Beyond the issue of the morality of this, beyond the issue of other consequences is the fact that what we typically see is someone’s identity, their being, completely wrapped up in their sexual practices.”

“Meaning that, do you think if you had an Aaron and Melissa Klein, or Jack Phillips baker, or anything else like that, where you have the LGBT clash with religious freedom or freedom of expression come before this judge, do you think this judge is going to be open and fair, irrespective of what he does, to rule based on the Constitution and the rule of law? I don’t think so.”

The Oregon Court of Appeals recently upheld a discrimination ruling against the Kleins, who owned the bakery Sweet Cakes by Melissa and refused to make a cake for a same-sex wedding.

Jack Phillips is a baker in Colorado whose case is being decided by the U.S. Supreme Court. Phillips is arguing that if he is forced to make a cake for a same-sex wedding it will violate his First Amendment rights.

Staver then compared the nomination of McDonald to the recent resignation of Judge Alex Kozinski, who has been accused of sexual misconduct by six women. This follows the traditional Evangelical conservative smear whereby all LGBTQ people are considered to be sexual deviants on a par with those who commit sexual abuse against others.

Here we see Staver employ another common far-right talking point. Namely, that being gay is about sexual practices and not sexual orientation.

Meanwhile, Staver sees no problem with putting someone who is staunchly Christian on the bench. In fact, he thinks to take that into consideration at all is ridiculous.

It’s hard to imagine he doesn’t believe that a religious person’s identity is wrapped up in their religious beliefs.

Staver is not alone in his opinion that gay judges are somehow unable to rule with impartiality on issues relating to LGBTQ rights.

Trump nominee Howard Nielson was a lawyer defending the Proposition 8 case in California that banned same-sex couple from marrying. When he lost, Nielson filed an appeal arguing that Judge Vaughn Walker, who presided over the trial, should have recused himself because he is gay.

Liberty Counsel has been busy lately exporting its anti-LGBTQ worldview, with a recent stop in Romania to advocate for a ban on same-sex marriage.