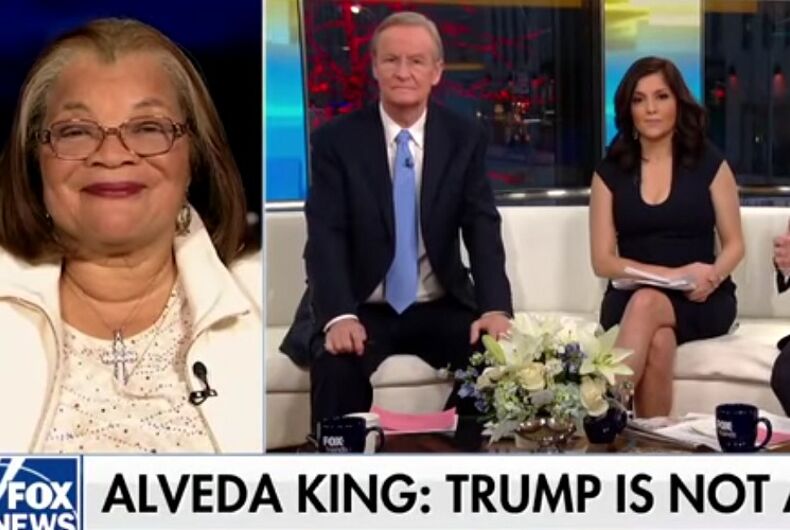 The former state representative who has made a career of helping white conservatives co-opt King’s legacy appeared on Fox & Friends this morning.

The hosts asked her to respond to U.S. Representative and Civil Rights hero John Lewis, who said that Donald Trump is racist and that he will not be attending the State of the Union Address.

King said that people should communicate more instead of pushing each other away, apparently not recognizing that protest is a form of communication. She then accused Lewis of not following “the Kingian non-violent steps” by not attending Trump’s speech, never specifying how that’s a violent act.

“I do not believe President Donald Trump is a racist,” she continued. “I mean, look at everything. The economy is up, jobs are up in the black community, there’s great promise to get a lot of people who have been unfairly incarcerated out. So, there’s so many economic opportunities, opportunities for babies in the womb. The president is working for America — period — as he’s draining the swamp.”

“And African-Americans are benefiting,” she continued. “Our jobs are going up. Our unemployment is going down. Companies are saying they are going to raise the minimum wage and do bonuses because of the tax cuts. So, the president is helping the African-American community. And I don’t believe President Donald John Trump is a racist.”

The hosts asked her how Trump could make it more obvious that he’s not racist.

Instead of simply replying “He could stop saying racist things,” King referred to a story that ran earlier about a 103-year-old woman who was still working.

While most of us find the idea of having to work until we drop dead terrifying, apparently the ticket to Trump’s popularity is to end retirement for most people.

King has a long history of extremist comments. At a 2010 NOM rally, she said that marriage equality was a form of “genocide.” In 2012, she denounced the NAACP’s support for marriage equality as “an endorsement of homosexual agenda.”