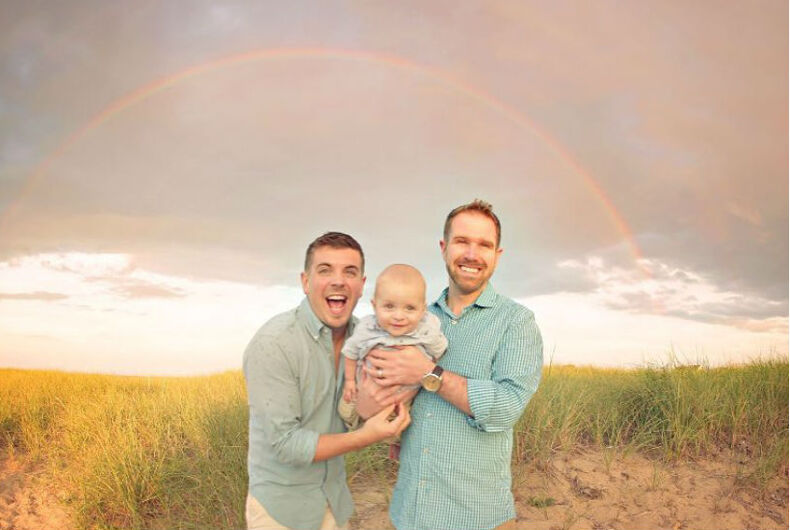 Gay dads Jason Babcock, 30 and Adam Gentile, 31, are already the proud parents of a baby boy, but as they announced in adorable fashion, their family is about to get even bigger.

That’s because their surrogate, Jessica, 31, agreed to yet again carry for them, and this time they’re getting triplets.

The couple, who live in Marlborough, Massachusetts, and met at the University of Massachusetts Amherst ten years ago, married in 2013. They welcomed their son, Tristan, into the world on January 6, 2017.

Babcock and Gentile announced the news of the upcoming additions to their family on Instagram, posting a photo of themselves in Seussian “Dad of All Things” shirts, with Tristan on their laps, rocking a Thing 1 onesie, and behind them Thing 2, Thing 3, and Thing 4 onesies.

The post shared the news that they “are expecting triplets come May 2018.”

“It’ll be a house full of laughter, love and craziness” they predicted.

“It’s overwhelming, but it’s also so exciting to think about the family we are getting with triplets,” Babcock told Gay Star News.

He also praised Jessica, who is has three children of her own, a husband, two jobs, and is in her senior year of nursing school, for taking on yet another responsibility.

“All of this is enough to handle without thinking about carrying a child for friends, let alone triplets,” he noted, calling her “an angel, a blessing, just the best.”

“She does it simply because she believes we deserve a family the way anyone else does,” he said. “We will forever be in debt to her and her family.”

Will America’s most hateful pastor get banned from Jamaica too?