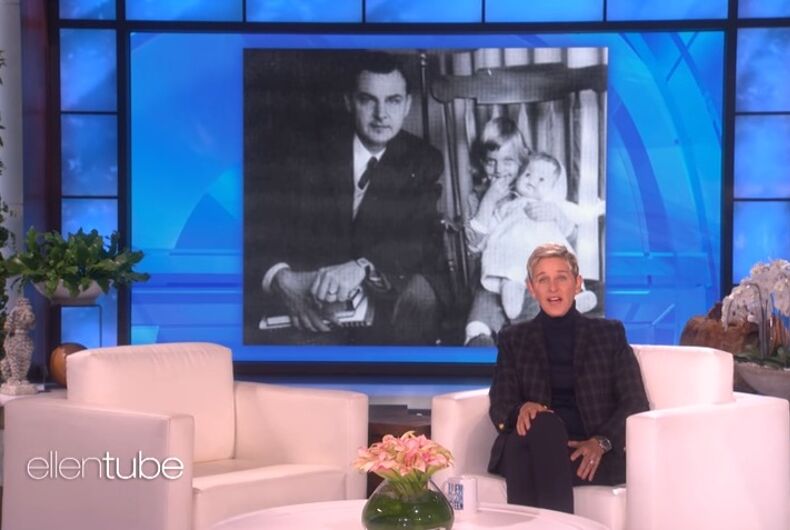 Ellen DeGeneres paid tribute to her father, Elliott, who died this week at age 92, in a moving segment on Thursday.

She noted that she mentioned the day before that she had a lot going on in her life while talking about the mudslides taking place in Santa Barbara where she lives. She then revealed what she had been referring to with that comment.

“I lost my dad this week,” she said, a picture of a young DeGeneres with her father appearing on the screen behind her.

DeGeneres said that her father had “a good, long life” and praised him for living his life “exactly how he wanted.”

“He was very proud of me, he loved this show,” she continued. “And he was a kind man, very accepting man, there was not one bone of judgment in his body.”

“He was very funny,” she added. “I think my brother Vance and I got our sense of humor from him.”

“We only took one family vacation. When I was a little girl we came to this lot, to the Warner Bros. lot, and took the tour and went around. And now I work at the Warner Bros. lot and have my own stage with my name on it. So he was really proud of that. And before he passed away I got to talk to him, so I got to say goodbye to him. I was leaving the building, and I looked back and there was a rainbow over the Warner Bros. studio.”

“This looks photoshopped,” she remarked. “This is what I saw after I talked to my dad, and he died ten minutes later after that. Pretty amazing.”

“I got a rainbow before he died,” she added.

When I was a kid, my dad took us on one vacation to Warner Bros. Studios. He loved this business. He loved that I was in it. When he died, I saw this rainbow over the stage they named for me. pic.twitter.com/QQswe3mwfi

Watch her talk about her father and the moment the rainbow appeared in the video below.

U.S. Ambassador to Panama resigns, saying he can no longer serve under Trump