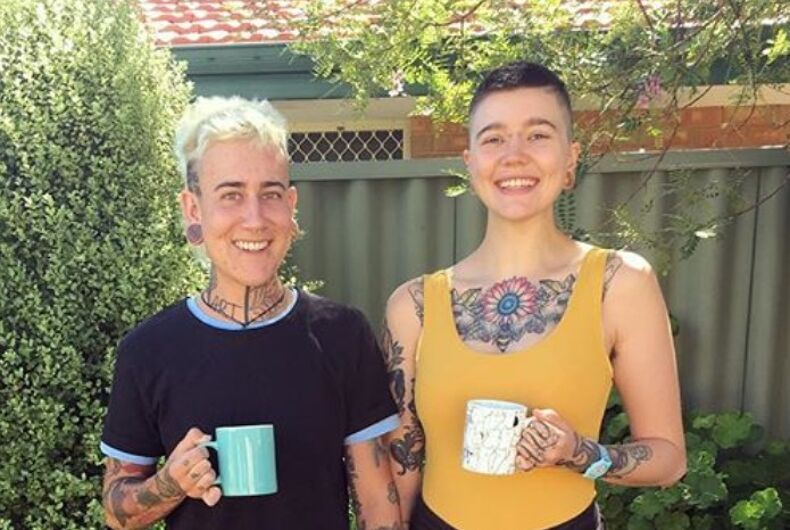 A queer couple was trapped on a flight for three and a half hours in front of a man who wanted to make them miserable.

Cat Franke, 23, and Julz Evans, 26, were flying with Jetstar from Melbourne, Australia, to Perth on New Years Eve to visit family.

Franke wrote on Facebook that the problems started when she kissed her partner at midnight. The man sitting behind Evans said, “Come on I wanna see some lesbians kiss.” The man kept his hand on the top of Evans’s chair, and the couple became uncomfortable and stopped talking.

“Unfortunately because we had not met his request he began his homophobic slurs, singing loudly and also mumbling about how we were faggots, dykes and poofters,” Franke wrote. “He then began to kick and punch my partner’s chair while saying how we weren’t equals and rambled about his beliefs about marriage.”

Franke said that it was obvious that the man was drunk at the start of the flight, but the staff served him another five to seven drinks. He punched Evans’s seat for hours and, when asked to stop, punched harder and shouted homophobic comments.

He also insulted a woman across the aisle about her weight.

Franke wrote that the flight attendants did nothing but “giggle” at his drunkenness. As they exited the plane, a flight attendant said, “Oh, I’m so sorry, he was making comments to me too.”

A spokesperson for Jetstar said that the airline is reviewing the case. They said that the man was only served three drinks and that the crew did not believe he was drunk at the start of the flight.

“We don’t tolerate discrimination of any kind,” the spokesperson said.

The airline denied knowing about the man’s behavior before the flight ended. “Our crew were made aware at the end of flight that derogatory comments had been made. Jetstar has a range of procedures in place to deal with these situations.”

Jetstar gave both Franke and Evans $50 vouchers as a “gesture of goodwill,” but Franke said that she wants a full refund and for the man to be blacklisted by Jetstar.

“I don’t want him to make anyone else feel like that,” she said.