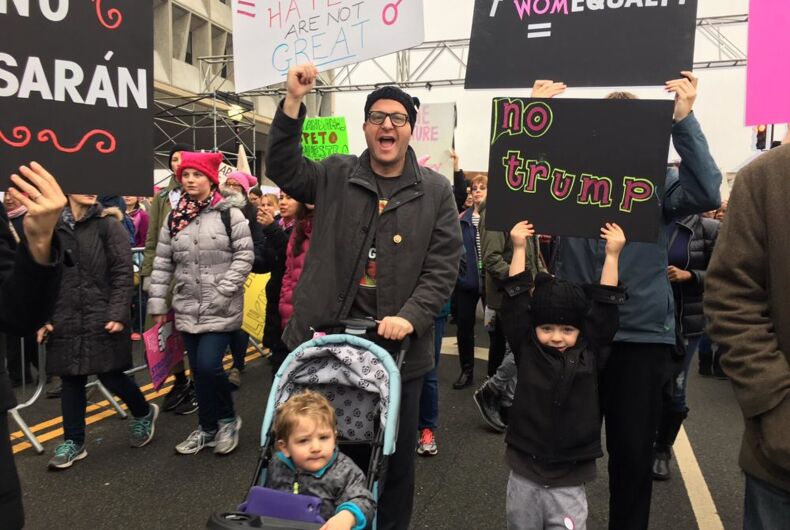 Congressman Jared Polis (D-CO) and his daughter, Cora, at the Women's March on Washington in 2017.Photo: Jared Polis

Polis penned an open letter to Cora this week to explain to her why they marched in last year’s Women’s March in DC and why they would be marching again tomorrow in Denver.

Read it below and try not to shed a tear.

It’s already been one year — and almost a third of your life so far! — since we participated in the big Women’s March in Washington D.C. I’m excited to have the opportunity to march with you again this year in Denver!

I know at the age of three, you’re only just beginning to sense the importance of the fellowship we shared with millions of civic activists around the country last year, and that we will share again tomorrow. And while I’m sad that the first President you will know is not only an unacceptable role model but in many ways a representative of the past that we thought we’d left behind, I am heartened by how our community is responding and resisting.

I hope that as you grow up, you look back on these marches the same way I look back on the equal rights and anti-war rallies I attended with your grandparents when I was a kid. I hope tomorrow’s march helps open the door for you to a lifetime of joining with others to fight for a better, kinder, more equal world.

I entered public office because I believe in the power of public policy, changing the laws to reflect our values and create a better future. But policy is not the only thing that matters. Many of the problems we face today will not be solved through legislation or by politicians. They’ll be solved by people from all walks of life coming together to break stereotypes, break cultural barriers, and break glass ceilings.

Despite the challenges and uncertainty of this moment in our history, there are reasons for hope all around you. From Susan B. Anthony to Rosa Parks to Dolores Huerta, to Colorado’s own Florence Sabin, we’re inspired by the strong women before you that have paved the path toward equality and justice. I’m proud you can look to your own family including your “Gramma” Susan Polis Schutz, who shattered the societal norms of her time to become a successful business woman and bestselling poet, even if she does feed you ice cream when she’s not supposed to.

This is just the start for you. I look forward to you living your life and building the future you desire. Hopefully the glass ceilings will be shattered by the time you get there. But if not bring a hammer.