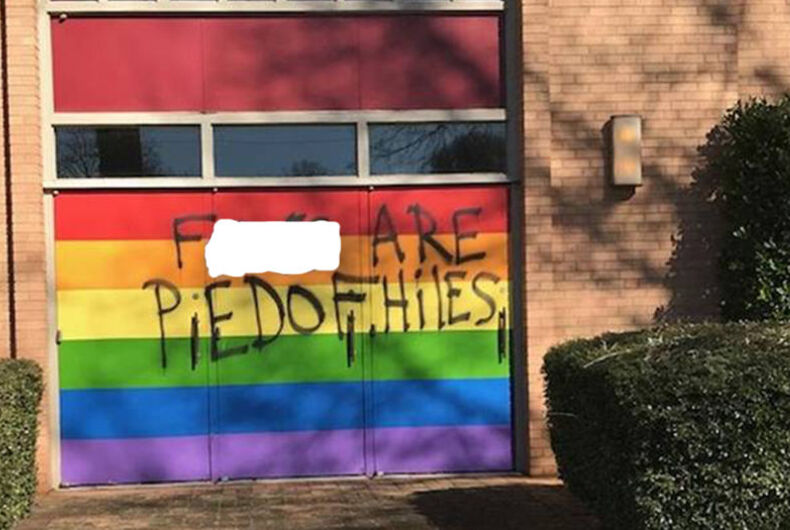 Wedgewood Church, located in the Madison Park neighborhood of Charlotte, North Carolinas has reported anti-gay graffiti painted on the church’s doors. It marks the latest incident of anti-gay vandalism in a long string the church has experienced dating back a decade. Police currently have officers investigating the crime.

“As a pastor, you hear all of these horrible stories for all these years. Everything is put in the context of these personal rejections that I know people have faced and this is just one more,” said Chris Ayers, co-pastor of the church after a similar event occurred in 2015.

The church responded by painting over the graffiti on the doors, which were red at the time, with a rainbow flag.

Wednesday morning Ayers learned of the latest vandalism: Someone had painted “fags are piedofhiles [sic]” on the pride colored doors. As an inclusive congregation, Wedgewood Church welcomes gay and lesbian parishioners, and even features pride flags painted on the building.

Needless to say, the flags have attracted their share of vandalism. In the past, someone broke into the church’s sign and rearranged the letters to read “a lesbo church.” Last year, someone taped a shotgun shell to the sign along with a threatening note in response to the sign’s message to “stop killing, disrespecting black people.” In the latter case, a suspect later confessed to the crime.

According to Pastor Ayers, the church has planned a painting party to refresh the church exterior and remove the graffiti. This time the pride flag they paint on the doors will be even more include a black and brown stripe, in solidarity with LGBTQ people of color. The congregation is also racially diverse, Ayers reports.

The parish also plans to add security cameras to the grounds, and has set up a GoFundMe page to cover the costs.

“Last time we were vandalized we looked into a security system and could not afford it,” Ayers explained. “Police advised us that any system needed to include video recording storage. Thankfully, we’ve now learned of a system that is affordable and are proceeding with it.”

The graffiti comes as the Charlotte-Mecklenburg school board voted to include LGBTQ protections as part of school diversity policies. The vote occurred after a heated meeting during which several attendees made anti-LGBT comments.