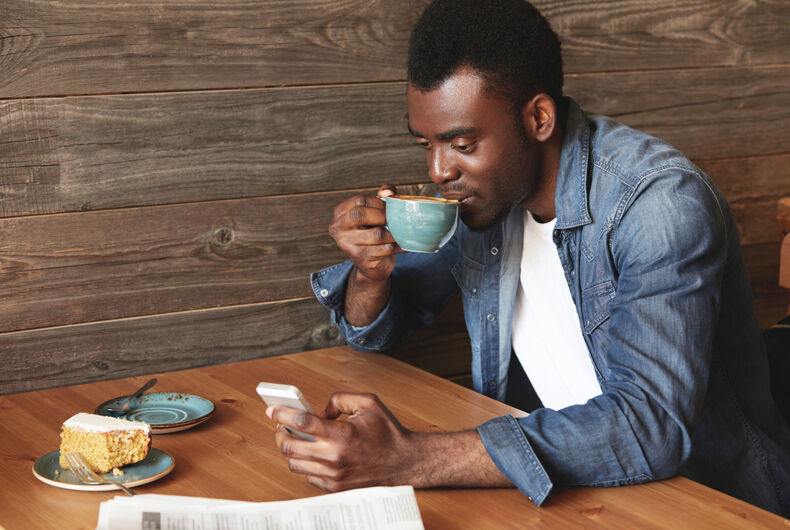 When a pansexual writer received homophobic texts from his aunt, he held nothing back.

Arkee E. wrote an article for Afropunk in October his father who was uncomfortable around the son he assumed was gay. When he was a teenager, his father called him a “f*ggot, a sissy, a bitch, and anything else that attacked my character.”

This past week, his aunt read the long, complex article about growing up with a verbally abusive parent, and she had just one question for him: “are u gay?”

He replied that he is pansexual and tried to explain what that means, but she pressed the point she was trying to make: “So basically you like men.”

She told him that there are no gay people in their family and that he needs to “pray that shit away,” and that’s when Arkee E. told her in no uncertain terms that she was in no place to judge him.

Hey, I appreciate your concern about my lifestyle albeit your inactiveness in my life. You never bought me a single thing in my life.… not a cookie, not a glass of milk to dunk it in, and not a napkin to wipe my milk mustache off.

While you’re worrying about my sexuality and what God is and isn’t okay with, you are shacking up with a whole married man in your house, and you’re not even divorced from your first husband. Don’t try to point out the wood in my eye when you have a whole plank in yours.

So my aunt tried it, and I think I handled myself fine. I didn’t cuss her out. I really am growing into a better person. pic.twitter.com/XASylDTK4o

He called her out for her adultery and for being declared an unfit parent twice, which is something she should have thought of before bringing religion into the conversation.

But instead of apologizing, she called him a faggot.

It turns out that he had just gotten started. Now he really dug into her.

Listen here, you saggy old, uneducated former drug-addict who had her children taken away twice: You cannot judge anyone. You walked down a dangerous path, collected every sexually transmitted infection that you can, and one day decided to put on an ashy ass wig and become a woman of God.

You’re absolutely nothing. You are a disgusting old homophobe that’ll drop her shit-stained panties for any guy that smiles at you, whether they’re missing teeth or not.

And yes, I do like men. And also, the guys I go for run rings around the guys you bring home every Saturday night, right before you run to church every Sunday and act like you do no wrong.

You can’t comment on anyone’s sexuality either, sweetie. At one point in time, you was licking and sucking on clits to pay for crack instead of taking care of your children, that’s why they got taken away twice — not once, but twice.

Stop worrying about my lifestyle and worry about how you’re going to remove the crows feet from underneath your eyes and the potholes on your face from your meth ear, Pastor Dusty Wig. Bye, ugly.

She dropped the F-bomb.

SHOULD I DRAG HER? OR SHOULD I LET HER GO FOR THE HOLIDAYS?! pic.twitter.com/8DxJSqha1x

I had to read her ass. I guarantee you she won’t call anyone else a faggot ever again. Ol’ shake-and-go wig wearing hag. pic.twitter.com/YCAAnPCVfa

After his rant, the aunt threatened to tell his mother. “Call your fucking sponsor, crackhead. BLOCKED,” he responded.

She threatened to tell my mother. Here’s what my mother said: “boy, why didn’t you tell her to find her dentures before running her mouth?” pic.twitter.com/WFS8z5h38p

Dept. of Silver Linings 2017: Milo Yiannopoulos goes down in flames