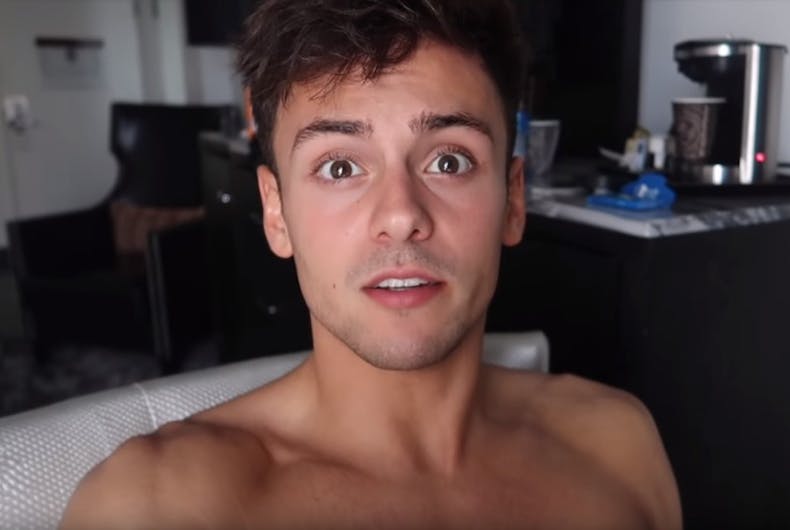 Tom Daley is reportedly distraught over the existence of the photos. Photo: YouTube Screenshot

Tom Daley is reportedly distraught that nude photos of him leaked, and Andrew Christian just made it worse.

The underwear company sent out an email blast sharing the photos, with the anything but subtle subject line, “TOM DALEY LEAKED NUDES!!”

In fact, you didn’t even have to click through to see Daley, exposed, lying on his stomach with his butt in the air.

The copy reads: “See Tom like you’ve never seen him before ;)” and encourages those who opened the email to click to view.

Underneath all of this are ads for the company’s wares.

People registered their disgust at the move on Twitter.

I’ll probably get slandered, but Andrew Christian emailing their entire database with Tom Daley’s nudes has got to be the lowest point of 2018 so far. #boycott #tomdaley pic.twitter.com/3IKXCc4GE1

And @andrewchristian is still trying to profit off leaked photos. This is today’s email. pic.twitter.com/Ku3Hr9pW9i

This is disgusting. You don’t use someone’s leaked nudes as a marketing tool. Never again will I purchase from a company that undermines someone’s privacy in such a way. The gay community should be better than that. https://t.co/1i0U8TcjgH

.@andrewchristian has always made ugly underwear.

the company’s attempt to profit from the violation of someone’s privacy is even uglier.https://t.co/6aboxJiuWh

It has even caused some to take a step back and reevaluate their own actions, and gay culture in general.

It appears Andrew Christian has heard the complaints, as the page on their blog hosting the images has been taken down. It now shows a “404 Not Found” error message.

The photos are said to have come during a break in Daley and his husband Dustin Lance Black, before they were married. It has been reported that Daley’s lawyers have been sending take down notices to websites hosting the images.