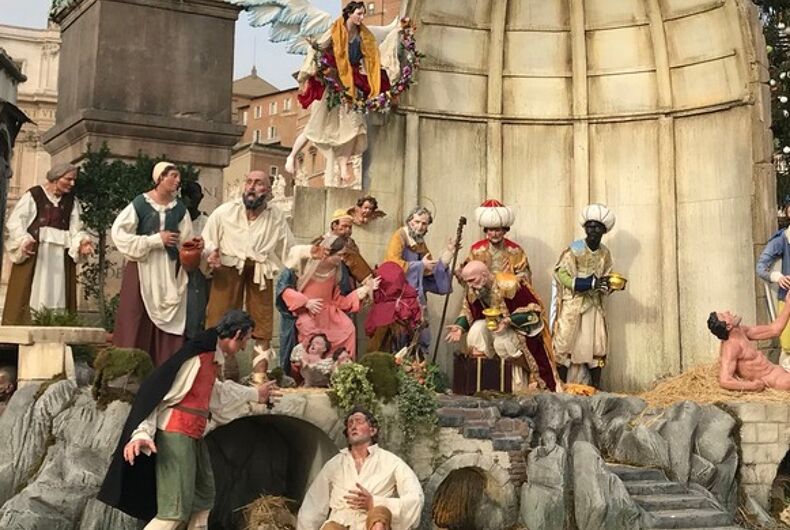 The center of the scene are the traditional figures representing the birth of the baby Jesus. That imagery is surrounded by twenty terra cotta figures that represent “seven corporal works of mercy.”

One of those works of mercy – clothing the naked – has drawn particular attention because the naked figurine is surprisingly hot.

Conservative Christians on Twitter had a number of complaints about the Nativity scene, like that its composition draws attention away from the baby Jesus, that the background looks decrepit… and that there’s a naked hot dude in the middle of it.

The more restrained Twitter users called it a “mockery.”

As an Orthodox Christian, I will state this is a mockery to the shared elements of our faiths. We will continue to pray for all. Lord Have mercy!!

The less restrained people said that it was a sign that the Pope is the antichrist.

WTF??? It's a bomb attack on a Christain church?? The pope really IS the Antichrist!!!

Far right Americans jumped at the chance to criticize the Vatican. LifeSiteNews went full conspiracy theorist and wrote that the nativity scene has “has troubling ties to Italy’s LGBT activists,” and Catholic Family News ran a story about it under the headline “Obscene Vatican Nativity Lauded By LGBT Activists – Too Racy For Facebook.”

Antonio Cantone, the designer behind the scene, said that it was intended to make people think. “It is not an immature nativity scene, it is particular and makes us reflect. It does not leave one indifferent, there are provocations.”

If that was his intent, then he succeeded. I now wonder if anyone would have cared about this if the male figure didn’t have a six-pack.