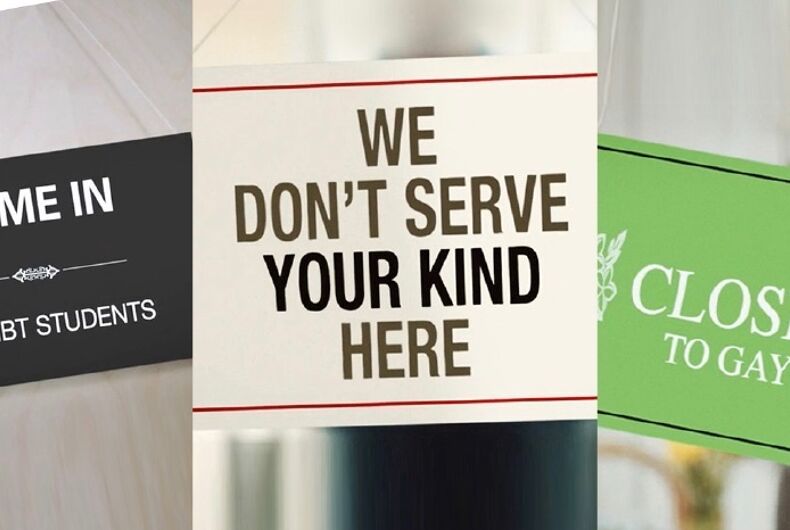 The United State Supreme Court appeared to be divided during arguments today in the case of a baker who refused to make a cake for a same-sex couple. Conservative justices seemed to favor the plaintiff, Jack Phillips, the owner of Masterpiece Cakeshop, while the more liberal justices sided with the Charlie Craig and David Mullins, the men who were denied a cake.

The case has far reaching implication not solely for LGBTQ rights, but all civil rights laws in general. Phillips doesn’t argue that his freedom of religion is being violated since a former Supreme Court ruling held that a religious belief is not grounds to ignore public accommodations laws. Instead, Phillips is arguing that his freedom of speech is in jeopardy.

Phillips claims he’s not simply a baker, he’s a “cake artist” and would be forced to use his creativity and participate in a same-sex wedding by baking the cake. A win for the bakery would allow others in creative industries – like chefs, jewelers, floral designers, and hair stylists to refuse service to any minority group by claiming doing so would infringe on their free speech rights.

The bakery’s claims are constitutional ones, so if they win, they will gain a constitutional right to discriminate that can’t be undone with a legislative fix.

During arguments, Associate Justice Anthony Kennedy seems to, once again, be the swing vote. Kennedy’s vote was the deciding factor for all the cases surrounding marriage equality and the decision to strike down the nation’s former sodomy laws.

As the American Civil Liberties Union’s national legal director David Cole argued before the bench, Kennedy remarked the attorney’s claim the baker, Jack Phillips, denied a wedding cake to the same-sex couple based on their identity, rather than objections to same-sex marriage, was “too facile.”

Kennedy also maintained “tolerance is essential” in society and accused the Colorado Civil Rights Commission of being “neither tolerant, nor respectful of Phillips’ religious beliefs,” noting a line in commission’s ruling calling the baker “despicable.” Kennedy also mentioned “other good bakery shops that were available.”

But Kennedy also questioned whether denial of wedding cake compromised the dignity of the couple — a principle of significant importance to the justice — and questioned why selling ready-made cake to couple wouldn’t be speech as opposed to custom cake. Kennedy also envisioned after a ruling in favor of the baker religious groups sending messages to bakeries to “not make cakes for gay weddings.”

Johnson reports that Justices Elena Kagan and Sonia Sotomayor made the strongest case for the couple and seemed to try to coax Kennedy at times to see the case as they do.

When Kristen Waggoner, senior vice president of U.S. advocacy for the law firm Alliance Defending Freedom, approached the issue of dignity by saying “in this case, dignity cuts both ways” and the Colorado law is demeaning to Phillips, Sotomayor shot back that wasn’t the case.

“It’s not demeaning to someone to say if you choose to participate in our community in a public way…you have to sell it to everyone if you open your door,” Sotomayor said.

Asserting society has “competing beliefs,” Sotomayor recognized LGBT people “have been humiliated…treated unequally” and enumerated the history of discrimination against them, such as being LGBT people being denied medical treatment. That history, Sotomoyor said, justifies a non-discrimination law in public accommodations.

“There’s certain…conduct you can’t engage in, and that includes not selling products you would sell to everyone else,” Sotomoyor said.

When Kagan asked whether denying a wedding to a couple was an affront to the LGBT community, Francisco conceded dignity issues were at stake, but sometimes there’s “dignity interest on the other side.”

It has been speculated that the justices could solve the problem by remanding the case back to the Colorado Civil Rights Commission with instructions to be more tolerant to Phillip’s beliefs or crafting the decision to only apply to Colorado law and not nationwide.