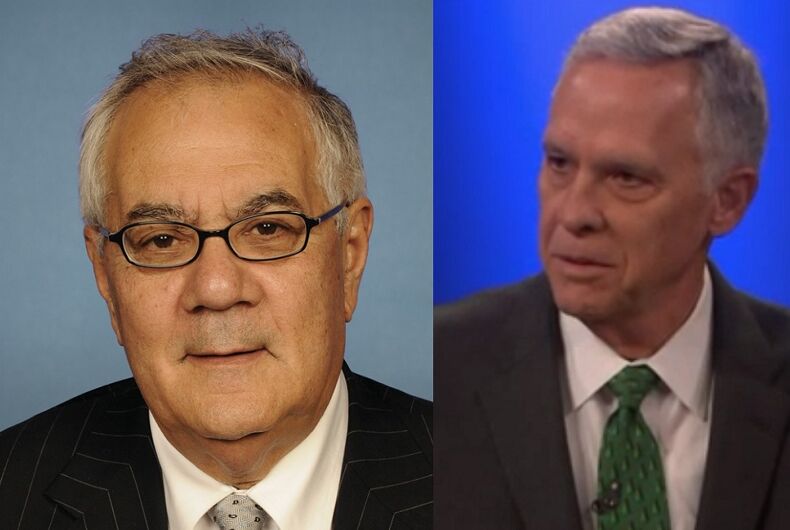 Kirk Humphreys, the former mayor of Oklahoma City and member of the school board of John Rex Elementary School, is being pushed to resign after he made comments comparing homosexuality to pedophilia.

Humphreys was on a local television politics show called Flash Point discussing Al Franken’s resignation with Oklahoma representative Emily Virgin. Virgin said that she thought it was right that Franken resigned, and Humphreys responded by asking her about former Representative Barney Frank, who is gay.

After some confusion about what there was to defend when it comes to Frank, Humphries clarified that being gay is just as bad as raping children.

“Is homosexuality right or wrong?” he said. “It’s not relative. There’s a right and wrong. If it’s OK, then it’s OK for everybody, and quite frankly it’s OK for men to sleep with little boys if it’s OK.”

Oddly, he didn’t notice that the same logic can be applied to heterosexuality.

Virgin tried to explain the concept of consent, but Humphreys wasn’t having any of that. He brought up Ralph Shortey, an Oklahoma state senator who resigned after he was caught paying an underage boy for sex and buying illegal drugs from him, implying that all that was wrong with that was that the victim was a boy and not a girl.

His words have led to a backlash. Humphreys resigned earlier this month from the University of Oklahoma Board of Regents following pressure from faculty and students.

Dozens of parents of children at John Rex Elementary School have also been asking for him to resign, and they’ve gotten 200 signatures on an online petition.

After a December 19 meeting with parents that Humphreys hoped would smooth over tensions, the parents feel even more strongly that he should resign. “His overall attitude was just dismissive of us and our feelings,” said parent Maggie Howell-Dowd. “He said that not only does he personally financially support the school but he also does a lot of fundraising, and if he were to leave the school board some of that money might leave with him.”

Another parent, John Beedon, said that Humphreys doubled down on his homophobia. “He went on to say homosexuality is morally wrong and you can’t expect him to make decisions outside of his moral code. That’s what does it for me. I don’t believe his moral code allows him to serve on the board and make decisions for our school, but he says he won’t resign.”

John Rex Elementary School is a charter school, and many of the students are there through a lottery system. Howell-Dowd said that Humphreys made a veiled threat of expulsion for the students of parents asking him to resign.

“He said the rules that are in place may keep you there right now but you never know what could change,” she said. “It was a moment when we all looked at each other and asked, ‘Was that a threat?’ I certainly left the meeting feeling very uncomfortable.”

Humphries has refused to comment on the meeting, only saying that the parents there were “pretty aggressive.”

He could be removed from the school board by the University of Oklahoma, which sponsors the charter school, or two-thirds of the board can vote him out.

Trump gives up: The military will start recruiting trans people on Monday