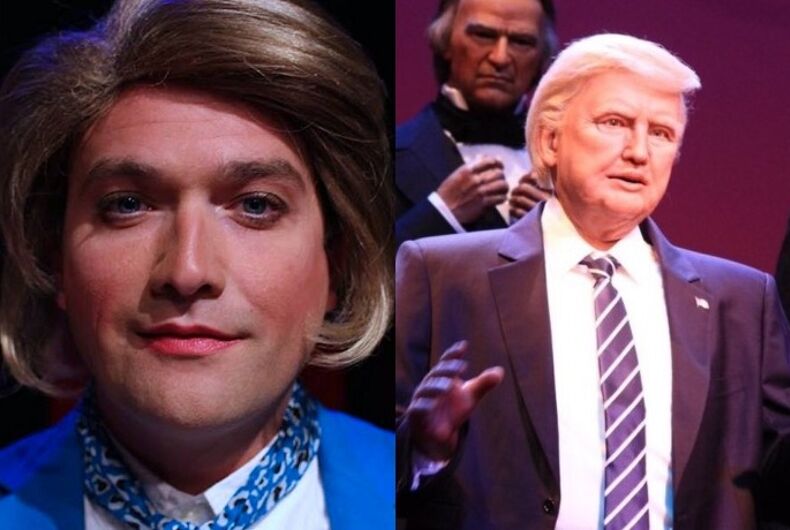 Comedian Jay Malsky, like so many other people this year, wanted to shout at Donald Trump. Since he’ll never get close enough to do it, he settled for yelling at the robot Trump at Disney World.

A couple weeks ago, the Hall of Presidents at the Magic Kingdom in Florida re-opened with a new presentation that included an animatronic Trump repeating patriotic platitudes on a 25-minute loop.

Malsky went to the Hall of Presidents and sat through the insipid introduction, waiting for the right moment.

“I figured a bunch of [Trump supporters] would be at this ride and wanted to show their kids what a protest looks like before Trump murders democracy,” Malsky told Splinter.

When robot Trump started talking, Malsky shouted “Lock him up!” repeatedly until he was escorted out of the Hall of Presidents.

“Lock him up” is a reference to how Trump supporters shouted “Lock her up” at campaign rallies because they believed the outlandish tales about Hillary Clinton that floated around rightwing media bubble, like that she killed the cat of a woman who accused Bill Clinton of sexual harassment, that she and Bill had a White House aide killed in 1993, and that she mismanaged her email server.

Fortunately, Malsky recorded his protest for posterity. In the video, other park-goers can be heard complaining.

I protested @realDonaldTrump at the #hallofpresidents cuz I'll never get this close in real life probs. #lockhimup pic.twitter.com/jKOQShIdz8

“If people are upset that I disrupted their family vacation, I hope they’ll think about the thousands children being taken away from their parents because of Trump’s racist immigration policies, or the parents of the hundreds of trans people murdered each year by transphobic and homophobic people, or the negative impacts of the tax bill on poor and middle-income Americans,” Malsky said.