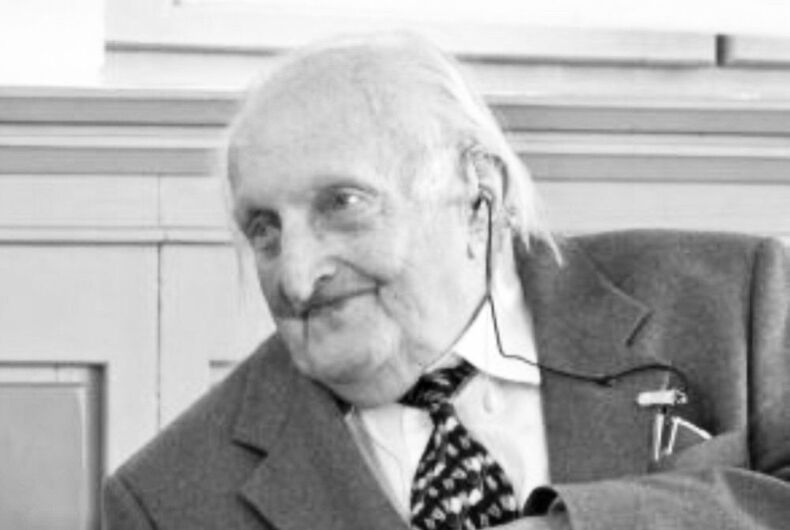 German gay activists paid their respects to Lauinger, who was imprisoned both by the Nazis and by the postwar West German government.

“We bow before a wonderful person, who fought to the end for the rehabilitation of persecuted gay people and the compensation for all consequences of imprisonment and conviction as a result of § 175,” the Magnus Hirschfeld Foundation tweeted.

Lauinger is best known for his campaign against Paragraph 175, the German law that outlawed male homosexuality.

Passed in 1871, the Nazis in 1935 tightened up enforcement of Paragraph 175 by conducting more arrests and increasing the maximum jail sentence for male homosexuality to five years. Around 50,000 people were convicted between 1933 and 1945 under the law, and it sent between 5000 and 10,000 gay and bi men to concentration camps.

Lauinger spent several months in prison from 1941 to 1942 because he participated in a youth group called the “Swingkids” that was set up as an alternative to the Hitler Youth. He went into hiding after he left prison.

Paragraph 175 stayed on the books and West Germany enforced the law after the war. Lauinger was arrested during the Frankfurt Homosexual Trials in 1950, when over 200 men were arrested for homosexuality. Several of the men committed suicide.

Lauinger was held for five months in prison, but was released without being charged because the only witness refused to testify against him.

He was one of the activists who campaigned to repeal Paragraph 175, which Germany abolished in 1994.

This past year, the German government passed a law to compensate men who were imprisoned under Paragraph 175. Lauinger’s application, though, was turned down by the Justice Ministry because he was never convicted.

“They made the law into a farce,” he said. “What is the difference to a normal person who has been in prison for five months, whether they were released or acquitted?”

Volker Beck, a former member of the Bundestag for the Green Party, knew Lauinger. “He had such an unusual story, with this continuity of persecution from the time of National Socialism to the Federal Republic,” Beck told Deutsche Welle. “He made his contribution by telling that story, and doing what he could to make sure that as many people as possible heard it.”

Beck said he was angry at the Justice Ministry’s refusal to acknowledge what Lauinger went through. “If an innocent person was kept in investigative custody for theft it did not have the same consequences as someone imprisoned for homosexuality. It made me angry because you could see what it would have meant to him if there had been a different decision.”

Medical journal describes a man who had too many prostate orgasms