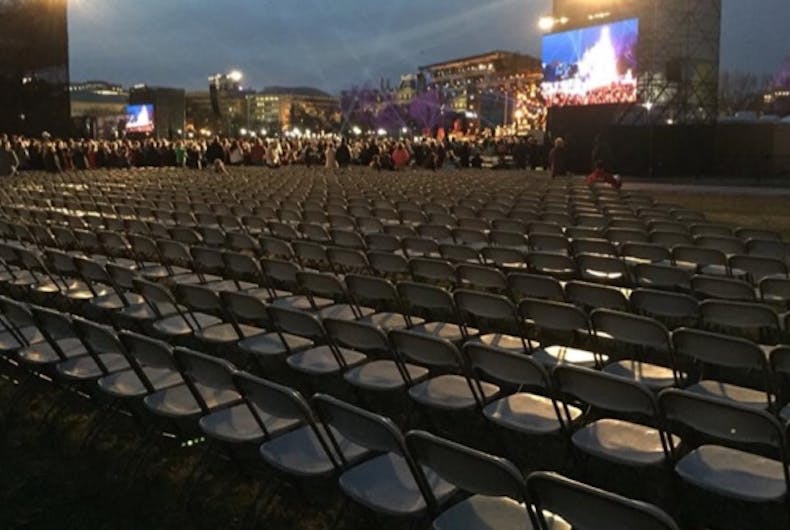 Traditionally the White House Christmas tree lighting is standing room only. This is what it looked like as President Trump spoke. Photo: Twitter/ @SteveRudinABC7

The traditional national Christmas tree lighting ceremony took place last night at the White House and President Trump was there to celebrate the season with his fellow Americans. Except no one showed up.

Normally, as any DC resident can tell you, the area around the National Mall and White House are jam-packed with people and cars. Thousands of people crowd together to watch the president flip the switch to “officially” kick off the holiday season.

ABC reporter Steve Rudin was there – and he was one of the few who showed up. Rows and rows of seats sat empty as Trump boasted about winning the War on Christmas as he stood next to a golden tree.

Traditionally the White House Christmas tree lighting is standing room only. This is what it looked like tonight as President Trump spoke.
📸@SteveRudinABC7 pic.twitter.com/5nYRJTbvsP

Of course the web went wild with comparisons to Trump’s inauguration and former press secretary Sean Spicer’s vehement lie that it was the “best attended in history” despite photographic evidence to the contrary.

And you know what comes next. Mockery and jokes. And they are as delicious as the cookies and milk that Santa loves so much.

Even newscasters got in on the joke this morning as the puny attendance will obviously irritate the president who lives for his “ratings” and adoration from fans.

Check out a clip from Morning Joe below and a selection of the best tweets about the ceremony.

Things did not go as planned at the National Christmas Tree lighting ceremony.

Once again, Trump's is so, so much smaller than Obama's…https://t.co/SIn1QnIEKk pic.twitter.com/m42hDB5x59