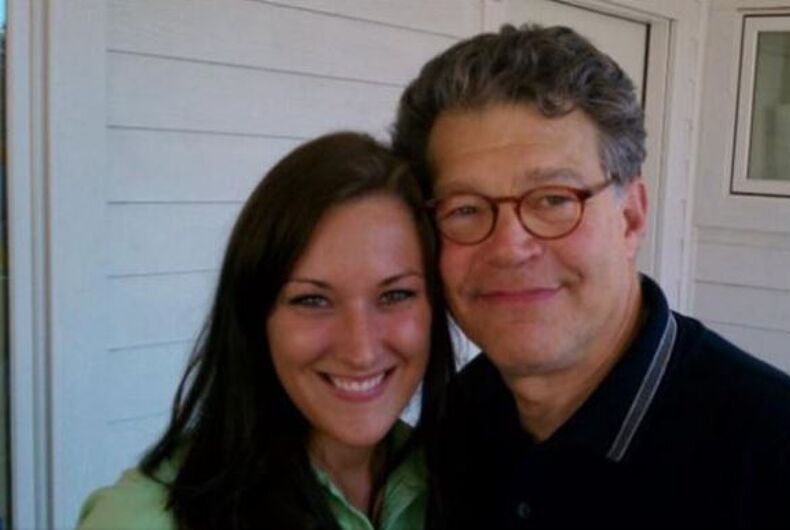 Lindsay Menz says Sen. Al Franken grabbed her inappropriately while she posed with him for a photo in 2010.Photo: Lindsay Menz

Senator Al Franken has been accused by a second woman of inappropriately touching her.

Lindsay Menz said Franken grabbed her while she posed with him for a photograph in 2010, at the Minnesota State Fair.

“Franken pulled me in really close, like awkward close, and as my husband took the picture, he put his hand full-fledged on my rear,” Menz told CNN. “It wasn’t around my waist. It wasn’t around my hip or side. It was definitely on my butt.”

“I felt gross. It’d be like being walking through the mall and some random person grabbing your butt,” she said. “You just feel gross. Like ew, I want to wash that off of me.”

CNN spoke to Menz’s husband, as well as her parents, all of whom said she told them of the incident at the time. She also posted the photograph to Facebook, and commented to her sister, “Dude — Al Franken TOTALLY molested me! Creeper!”

“I was upset. I wasn’t happy about it in the least,” her husband, Jeremy Menz, said. “He was already gone and I wasn’t going to confront him. But yeah — I was in shock, really.”

“I take thousands of photos at the state fair surrounded by hundreds of people, and I certainly don’t remember taking this picture,” said Franken in a statement. “I feel badly that Ms. Menz came away from our interaction feeling disrespected.”

Franken was accused by local radio news anchor Leeann Tweeden just days ago of forcibly kissing her during rehearsals for a comedy sketch to be performed for the troops, back in 2006. She also released a photograph of Franken grabbing at or toward her chest while she is asleep.

Menz said she came forward because Tweeden did so before her, and expressed a desire to empower other women who have experienced similar behavior to feel able to tell their stories.

Franken has apologized for the incident with Tweeden and has said he would welcome a Senate Ethics Committee investigation into the matter. Since it occurred before he was elected to office, it seemed unlikely one would occur, however.

The alleged incident with Menz occurred after he was elected. An investigation now seems all but certain, unless Franken heeds the call of some progressives who have already been asking him to resign. So far he has said through a spokesperson that he has no plans to do so.

Top Republican lawmakers, like Sens. Mitch McConnell and John McCain, have been calling on Alabama Senate candidate Roy Moore to step aside amidst allegations of sexual misconduct with teenagers. Moore has denied the allegations and is refusing to pull out of the race, where voters will decide between him and Democratic candidate Doug Jones on Dec. 12.