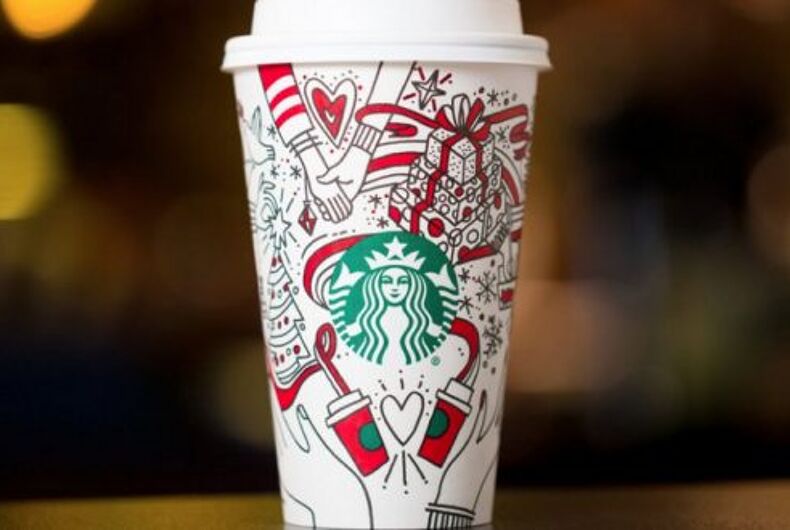 It’s that time of year again. Halloween has passed, Thanksgiving is coming, and Starbucks is ready to roll out their red holiday cup almost two months before the holiday. Get ready for the impending freak out from the religious right and Trump supporters (same thing, really, but whatever.)

You see, the cup isn’t red.

Newsweek describes the cup as “a fairly plain white cup featuring the outline of various images, including two people holding hands. The reason for this is because Starbucks is hoping to inspire you to color in your own cup.” Obviously this is a ploy to lead to Satanic domination of coffee shops.

“This year’s cup is intentionally designed to encourage our customers to add their own color and illustrations. We love the idea of everyone making this year’s cup their own,” Starbucks’ executive creative director Leanne Fremar told the magazine.

“I liked the idea of hands as the centering point, a symbol of connection, love and giving joy,” Illustrator Jordan Kay continued. “Whether it’s wrapping presents or decorating a tree, writing cards or enjoying a mug of cocoa.”

Donald Trump encouraged a boycott of Starbucks while campaigning for president because the chain put out a cup that was two tones of red but didn’t include the phrase “Merry Christmas.”

“Did you read about Starbucks? No more ‘Merry Christmas’ at Starbucks,” he told a wildly booing crowd. “I have one of the most successful Starbucks… in Trump Tower. Maybe we should boycott Starbucks? I don’t know. Seriously, I don’t care. That’s the end of that lease, but who cares?”

While the cup feature a Christmas tree, doves, ornaments, presents, and holiday cards, it does not include the words “Merry Christmas.”

Prepare yourself. The deplorables are coming.