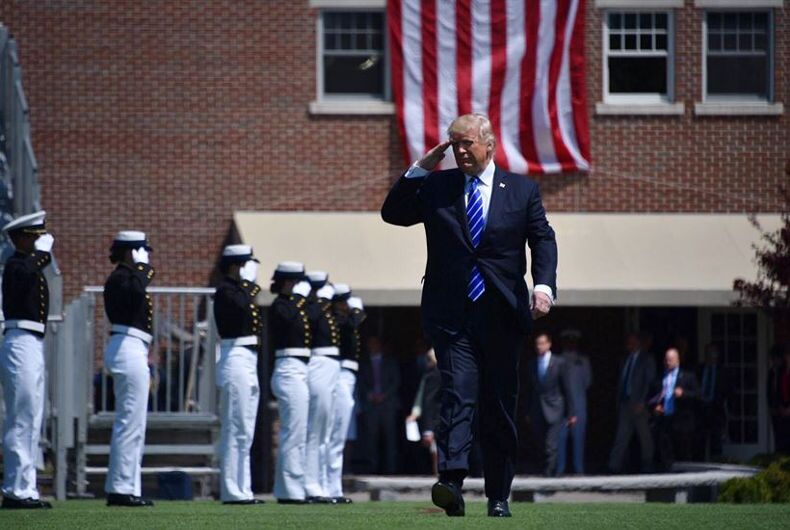 A second federal judge blocked Trump’s attempt to ban transgender soldiers from the military yesterday, but the administration struck back and filed an appeal of a previous partial block.

U.S. District Judge Marvin Garbis said transgender people serving in the military have “demonstrated that they are already suffering harmful consequences,” since the president first tweeted out news of the change in policy.

It went further than the ruling by U.S. District Judge Colleen Kollar-Kotelly, in October, that said the policy had to revert back while the challenge to the policy change worked its way through the courts, by also ruling against blocking funding for gender confirmation surgery.

“The lack of any justification for the abrupt policy change, combined with the discriminatory impact to a group of our military service members who have served our country capably and honorably, cannot possibly constitute a legitimate governmental interest,” Garbis wrote.

The Justice Department tried, and failed, to have the case thrown out.

Just hours after the ruling by Garbis, the Trump administration filed an appeal to the October 30 ruling by Kollar-Kotelly, a move that was quickly criticized by advocates.

“Despite rulings from two federal judges that Trump’s transgender military ban is unconstitutional, the Trump administration is digging in its heels,” said NCLR Legal Director Shannon Minter. “Thousands of transgender Americans are serving honorably—many with decades-long careers—and are just as willing and capable as any of their peers. This attack on our dedicated service members is not just unconstitutional, it’s a disgrace.”