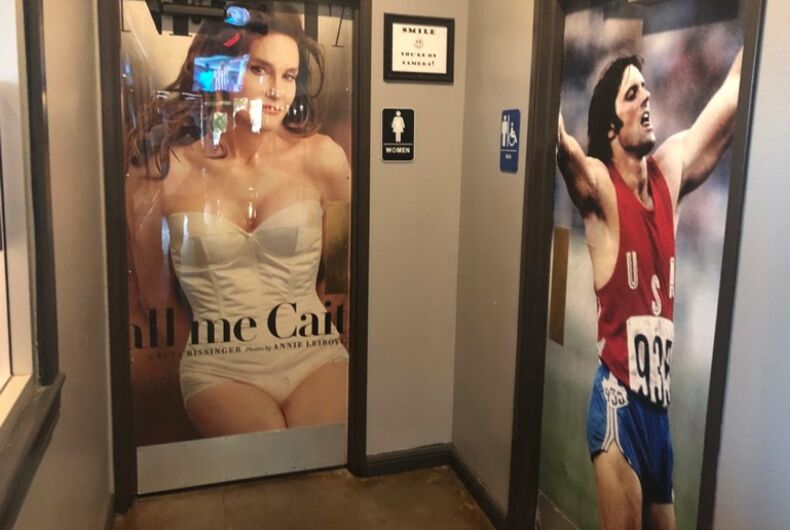 Dodie’s Place, a cajun restaurant in Allen, Texas, is under fire for using photos of Caitlyn Jenner as bathroom signs. A photo of Jenner pre-transition adorns the men’s room door while a photo of her Vogue cover is on the women’s.

Dallas Morning News editor Dom DiFurio first spotted the offensive signs and tweeted it out for the world to see (and mock).

“Collin County, where Allen, Texas is, as a whole is considered a conservative bastion in North Texas,” DiFurio said to the Daily Dot. “I wouldn’t consider it a particularly great place to be LGBTQ.”

Texan transgender folks have faced a slew of hurtful and discriminatory proposed laws in recent years with several attempts to institute a North Carolina-style bathroom bill that would force trans people to use the bathroom of the gender they were assigned at birth instead of their actual gender identity.

“I saw it as a bit of a physical manifestation of the wink and nod jokes told often to me when I see people from that part of town,” DiFurio said. “The kind of jokes where you feel like the person telling the joke wants you to laugh to verify their inclinations, but doing so would perpetuate a terrible environment for anyone in the LGBTQ community.”

Calls to Dodie’s Place to confirm whether or not the photos were still being used were not answered.

I don’t understand how this has assumedly been up for as long as it has.

Milo Yiannopoulos’ sugar daddy cuts financial ties: ‘I was mistaken to have supported him’