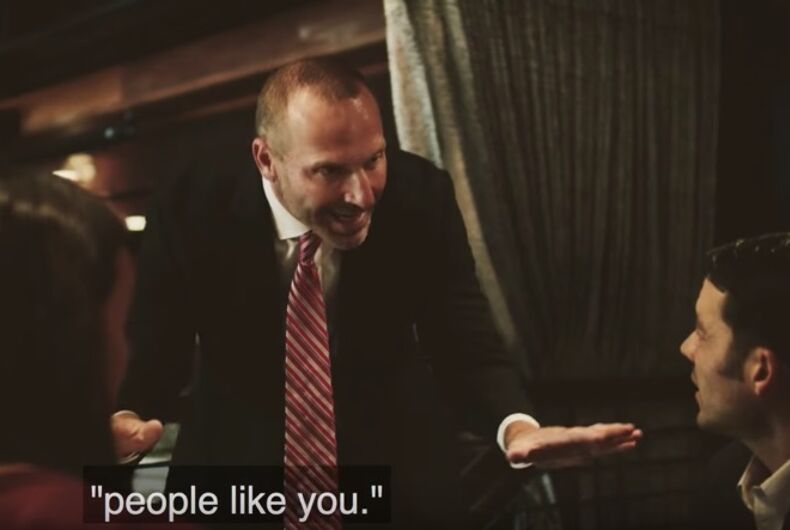 The Supreme Court will hear arguments on Tuesday in the case of Masterpiece Cakeshop v. Colorado Civil Rights Commission, a landmark legal showdown over the issues of legalized discrimination against same-sex couples. Legal analysts have cited the case as one of the most defining in gay rights history.

It all began back in 2012, when a Colorado gay couple, David Mullins and Charlie Craig, ordered a cake to celebrate their wedding. They visited Masterpiece Cakeshop, a Denver bakery, to order a celebratory cake. The shop’s owner, Jack Phillips, turned the couple away, claiming his self-described “Christian” faith prevented his business from serving gay couples. Phillips offered to sell the couple brownies instead of a cake.

Now Phillips has pushed the case to the Supreme Court with the backing of the Trump Justice Department, which has argued that laws forbidding discrimination against LGBT people violate free speech protections. Attorneys for Mullins and Craig, backed by the American Civil Liberties Union, have counter-argued that the law applies to business practices, not to speech itself.

With the potential ruling in the Masterpiece case having far-reaching effects on civil rights, over 75 leading progressive organizations have launched the “Open to All” campaign. A ruling in favor of the license to discriminate could extend to people on the basis of gender, race, religion, disabilities and others. And now they need you.

So far, legal experts have predicted a split court ruling which may hinge on the vote of Justice Anthony Kennedy, who cast the deciding vote in a number of gay rights cases, including Obergefell v. Hodges, which paved the way to nationwide marriage equality.

When the Supreme Court hears the Masterpiece case, the stakes are high. This isn’t about cake. It could give business a license to discriminate against people of color, LGBT people, women, minority faiths, and people with disabilities.

Check out one of the “Open to All” ads below and share it to your own social media outlets right away.