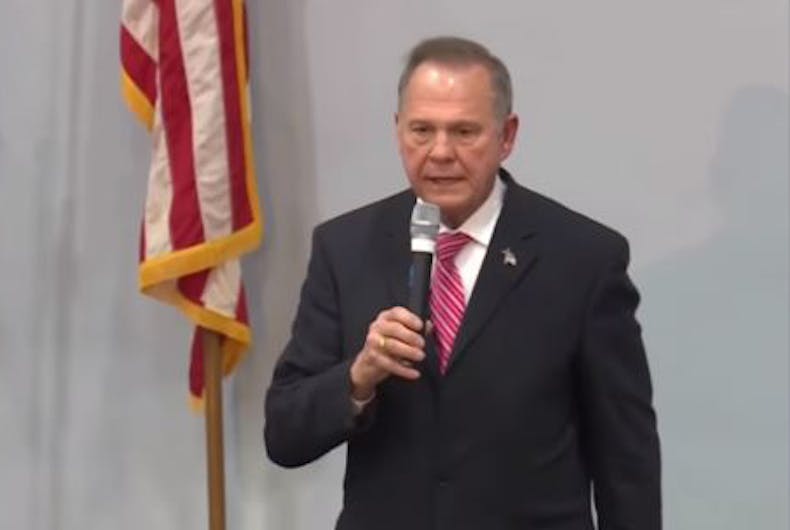 Alabama Senate Republican candidate Roy Moore co-authored a study course, published in 2011 and obtained by ThinkProgress, that discourages women from running for office.

It also states that there is a moral obligation to never vote for a woman to hold public office. It also criticizes a woman’s right to vote.

The course, titled Law and Government: An Introductory Study Course, and consisting of hours of audio and video lectures, was co-authored by Moore, Doug Phillips, Dr. Joseph C. Morecraft, and Dr. Paul Jehle.

Moore is listed as one of the “Featured Speakers” on the back of the packaging, as seen below.

The curriculum was produced by the now defunct Vision Forum, an evangelical organization that taught “Biblical patriarchy.”

The Vision Forum closed in 2013, when Phillips resigned after admitting to an affair with a woman named Lourdes Torres-Manteufel. She soon sued Phillips and Vision Forum, alleging that he was mentally and sexually abusive to her. She said the relationship started in 1999, when she was just 15 years old.

The case has obvious parallels to sexual misconduct and assault allegations leveled by numerous women against Moore, some claiming they were as young as 14 or 15 when the incidents occurred. Moore has denied the allegations, claiming they are politically motivated.

So what is Biblical patriarchy, you ask?

From the group’s website (via Internet Archive’s Wayback Machine), explaining :

Egalitarian feminism is a false ideology that has bred false doctrine in the church and seduced many believers. In conscious opposition to feminism, egalitarianism, and the humanistic philosophies of the present time, the church should proclaim the Gospel centered doctrine of biblical patriarchy as an essential element of God’s ordained pattern for human relationships and institutions.

For at least a decade, Moore served on the so-called “faculty” of Vision Forum’s “Witherspoon School of Law and Public Policy.”

It was not a school in the proper sense. Think something along the lines of Trump University.

In actuality, the Witherspoon School of Law and Public Policy was, as ThinkProgress reports, “a series of four-day crash courses that taught men — and only men — that the Bible is the source of ‘law and liberty and the only sure foundation for addressing the challenging ethical questions of the twenty-first century.'”

A 2008 lecture by Moore, included in the “Law and Government” curriculum, finds the former judge speaking on his fight to keep the Ten Commandments monument in the rotunda of the Alabama Judicial Building, which led to his eventual removal from the court.

Moore also criticizes the then recent Supreme Court ruling legalizing marriage equality in the United States. You can listen to his lecture below.

Another lecture in the series, on which Moore worked, is delivered by William O. Einwechter, a teaching elder at Immanuel Free Reformed Church. In it, Einwechter argues that a woman’s place, according to the God of the Christian Bible, is in the home.

“Husband, children, and home: Those three summarize God’s definition of woman,” he says. He instructs that a woman must submit to her husband’s “authority,” have his children, “pour her life into” those children, and “stay in that sphere” of the home.

“She’s not a warrior. She’s not a judge. She’s a woman. Created by God. Glorious in her place and in her conduct and in her role,” Einwechter continues. “Nothing is said in scripture that supports the notion that she is qualified or called to be a civil magistrate.”

He also calls feminism “heresy,” arguing that it’s “one of the most destructive ideologies of the past 50, hundred years,” blaming it for everything from “abortion on demand,” to the “homosexual agenda.”

The lecture is introduced by an unnamed man, who also argues against a woman’s right to vote. Audio clips from that lecture follow.

The Moore campaign has yet to respond to request for comment from ThinkProgress.

Alabamans head to the polls on Dec. 12 to decide between Moore and Democrat Doug Jones.