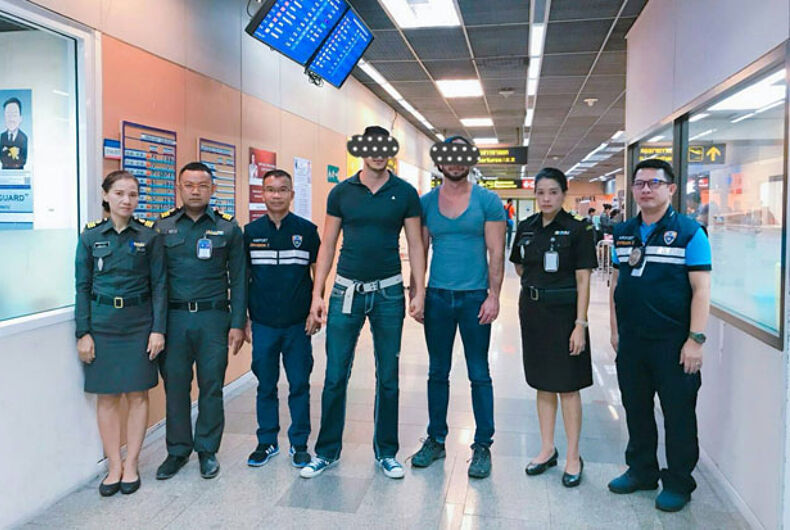 A married American gay couple were arrested after showing their asses at a sacred temple in Thailand.Photo: Thai immigration police

Travis Dasilva, known online as Ti, and Joseph Dasilva, a married American gay couple, have become Instagram stars for their Instagram account “Travelling Butts.” With 14,000 followers, the duo would travel the world, pull down their pants at famous landmarks and moon the camera so they could post it online.

But the two have found themselves arrested after performing the trick at a Buddhist temple in Thailand – and authorities plan to throw the book at the two for desecrating the holy place with their childish stunt.

The couple’s Instagram account has now been taken down, but the two remain in jail. They were arrested at the airport as they prepared to leave the country. The men admitted to taking the photos and posting them online.

Friends of the couple were alerted after the men posted to Facebook asking for legal assistance. One of the men posted, “I don’t know how much longer I’ll have my phone” before they were cut off from communication.

The couple’s friend, M.G. Perez, told the San Diego CBS station that the couple’s silence has become concerning. “They were messaging on Facebook earlier in the day. Then, that stopped. They have a huge community of friends around the world and so everyone is concerned,” he said.

“It is in no way any form of disrespect. It’s just their expression.”

The Thai government released a statement on Facebook about the arrest, saying, “A gay American couple who author the Instagram page “Travelling Butts” has been arrested at Don Mueang International Airport for having taken photos showing their backsides with the respected Temple of the Dawn. A deputy spokesman for the immigration police said the charge would not be a normal public indecency charge. Instead, they would be charged with committing indecency in a place of worship, which carries a long jail term. This is a reminder that everyone should have respect for Thai religion and culture.”

Sadly, the Dasilva’s did exactly the opposite.

While friends and family are obviously correct to be concerned about their loved one’s safety, it doesn’t excuse their childish act. And the one thing that neither men posted to social media after their exploits is the one thing that could have saved them a trip to the slammer – an apology.

Do they deserve long sentences? Of course not. But do they need a wakeup call and at least a slap on the wrist? Definitely.

Singing along to showtunes can benefit Alzheimer’s patients