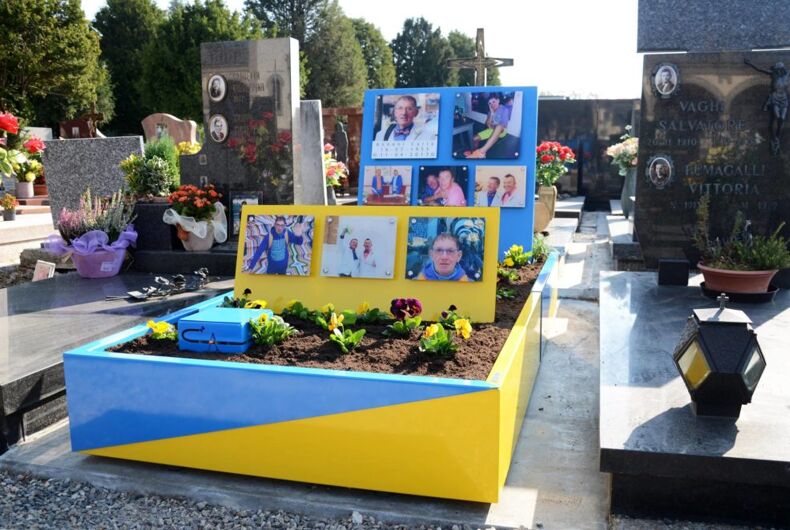 A gay man’s tomb in the northern Italy town of Mariano Comense has attracted attention and censure from the right.

Carlo Annoni died at age 61 earlier this year. His widower Corrado Spanger said that they talked about the tomb he wanted in the time leading up to his death. “Carlo and I wanted to make it clear that gay love does not have any harm in itself. If it is lived with intensity, like ours was, it gives us a colorful life,” he said.

Carlo and Corrado were together for 36 years and were advocates of LGBTQ equality. In 2012, they traveled to the United Kingdom to marry. In 2016, they were the first gay couple to get a civil union in their town.

The flamboyant tomb, though, upset some people. One person who talked to Corriere della Sera said that it is in “bad taste and too glamorous.”

Andrea Ballabio, a city council member and the leader of the center-right Forza Italia party in Mariano, said that the grave is “too showy and colorful” and is “almost an insult to the other deceased and their loved ones.” Ballabio has introduced a motion to regulate the colors and designs of grave sites.

A local LGBTQ organization has already denounced the motion. “We believe that everyone has the right to determine, as they believe best, how to commemorate a deceased person,” said Arcigay Varere president Giovanni Boschini. “The motion presented by Forza Italia is insensitive and out of place.”

I would go further and say that it’s indecent.

“Usually a tomb is mute,” said Corrado. “But this tomb speaks of him: from the colors he loved most, the gold and the blue, and the feeling that it was all for him: love.”

Lots of people find love between two people of the same sex offensive in and of itself. It’s no surprise that some would feel comfortable expressing their distaste with gay love in a cemetery as well.

15th man to accuse Kevin Spacey: ‘His face’ was ‘shocking and then scary’