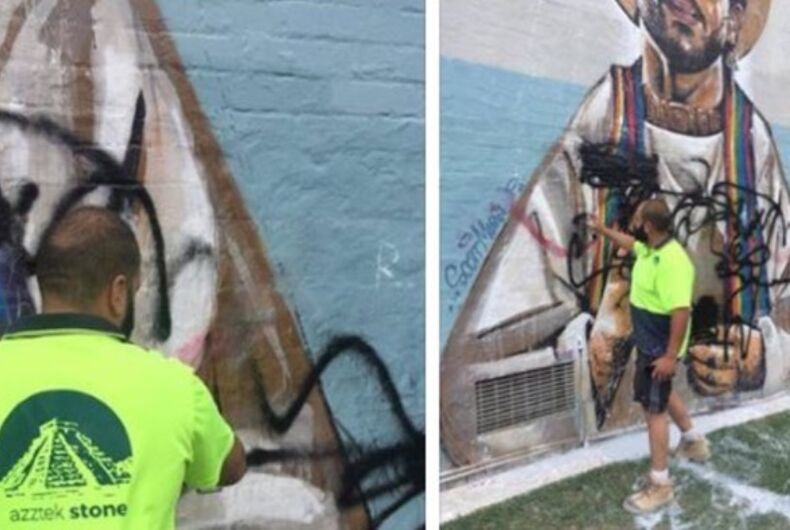 When you’re willing to follow instructions from a Facebook group called “Christian Lives Matter,” you’re already a few fries short of a happy meal. So you will be shocked to discover that after one moron did their bidding to vandalize a mural of George Michael, he was quickly busted and lost his job.

Here’s a pro tip: If you’re going to try to destroy a public work of art, perhaps you shouldn’t do it in the middle of the day while wearing your work shirt.

“We at Azztek Stone strongly and vigorously condem [sic] the action taken by one of our employees. His actions in no way reflect on the beliefs held by the company, its policy and the belief of all other individuals employed by Azztek Stone,” the company said in a prepared statement. “The employee has been stood down and the company is willing to compensate for the damage that has been done and return the artwork to its original condition.”

“We apologise for any offence or harm the irresponsible actions of our employee might have caused.”

Thankfully, the story has a happy ending. While the artist says they will repair the damage done to the mural, some folks couldn’t wait. They painted lovely messages like “Too late. Love Won” and similar messages all over the black paint used to deface the mural.

The same artist did another mural featuring Abbott marrying himself that has not been attacked. A third mural depicts a pair of Kanye Wests kissing.

that controversial Newtown mural of Tony Abbott and George Pell, defaced yesterday, has now been painted over entirely https://t.co/8v9nbNR0q3 pic.twitter.com/TJ5wEpkY3r

All done! 👍🏻 The response to this work has been incredible, thanks everyone who stopped and said hi 👋🏻 Dont forget to Vote!! 🏳️‍🌈🏳️‍🌈🌈🌈👰🏻👰🏻🤵🏼🤵🏼 #voteyes #tonylovestony #MarriageEquality #sydney #redfern Big thanks @hunters.corner for the wall!! Corner Pitt st and Redfern st Redfern