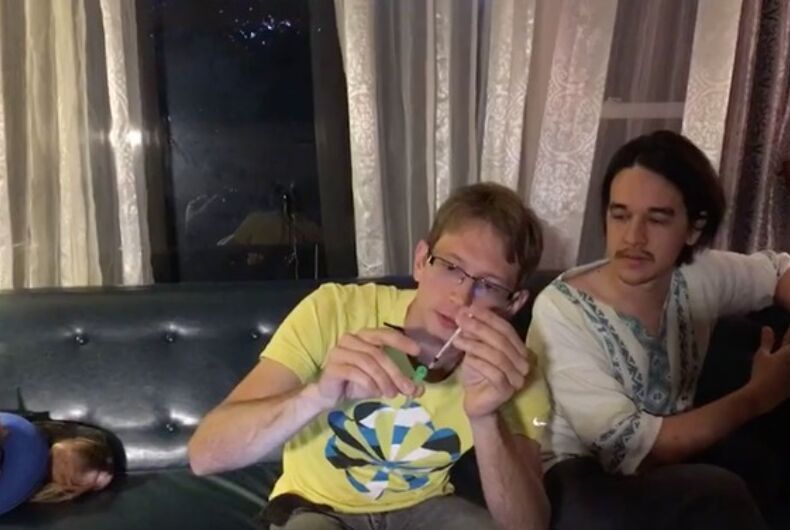 Call it homegrown hacking, via webcam.

A man infected with HIV has injected himself with a solution designed as homemade gene therapy while streaming the moment on webcam. By committing the event to camera, he’s ensured future generations will marvel at his bravery–or his folly.

Tristan Roberts, a Washington DC resident, became infected with HIV about six years ago. Though he initially controlled his condition with medication, he found the side effects taxing to his well-being. Issues with insurance and travel reduced his faith in drug therapy, prompting him to seek out new means for treatment.

Roberts eventually decided on an experimental gene treatment promoted by controversial biotech firm Ascendance Medical. Ascendance has made wild claims in the past, such as a blood transfusion that can restore female fertility.

Roberts elected to take part in an experimental gene therapy promoted by Ascendance. The firm paired him with three home-grown biohackers that used computer software to design a treatment serum that would grant Roberts immunity to the HIV virus.

The treatment might have more legitimacy than it may seem. Designed around a rare genetic mutation that grants HIV patients a natural immunity to the virus, the gene therapy has already received some notice with reputable health organizations like the NIH. A similar vaccine treatment involving the same gene, known as N6, is already undergoing trials.

But Roberts wouldn’t wait. His biohacker friends designed a solution using medical supplies available on the internet and computer software. Once prepared, Roberts streamed the whole event on his webcam for posterity. He injected the N6 gene into stomach fat, hoping that his body would learn from the solution and develop a full genetic immunity to HIV.

The treatment, however, carries significant risk. Not only can genetic modification like the one Roberts has attempted fail, it can have dire consequences on the human immune system.

Furthermore, Roberts’ streaming of his injection, his self-experimentation, and the involvement of a private company, Ascendance Medical, raise difficult ethical questions. In the event the treatment did work, further study would likely be required, since Roberts himself has not taken standard, clinical steps to monitor all the factors and elements of his condition.

Still, Roberts remains hopeful. Should his homemade gene therapy work, it could open the door to a world of new treatment, not just for HIV, but for millions of people worldwide willing to take on experimental treatment.

You can watch the entire experiment below. Obviously, we don’t recommend you do this.

Live: World's first patient zero testing on a gene therapy cure for HIV/AIDS. Tristan Roberts has chosen to self-administer an experimental single-dose antitoxin to eliminate the presence of HIV from his body.Livestream by Ford FischerUpdate: Read the full story: http://news2share.com/start/2017/10/18/biohackers-produce-self-administer-attempt-at-gene-therapy-hiv-cure/