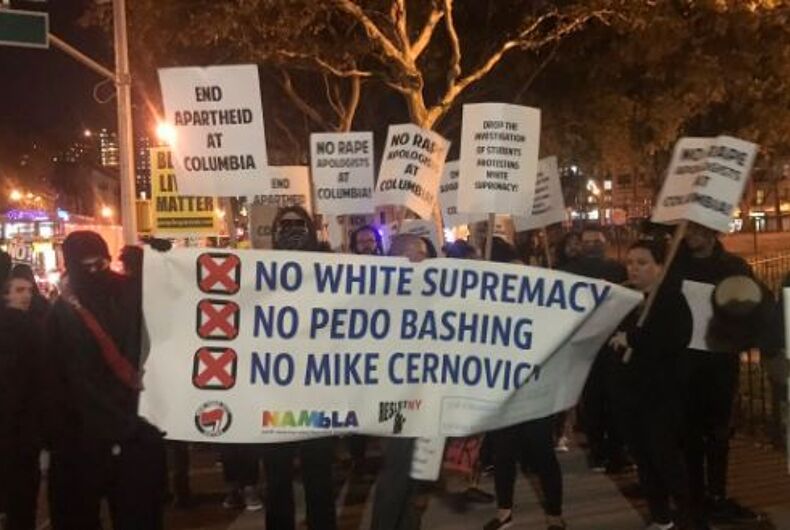 “Alt-Right” extremists planted a pro-pedophilia banner at a protest against a conservative speaker in order to smear them with their favorite fake charge.

Activist and self-described “journalist” Mike Cernovich gave a speech at Columbia University, on the invitation of the college Republicans group. It drew dozens of protesters, some of whom appear to have been tricked into holding a sign showing support for NAMBLA, a more or less non-existent group that advocates for abolishing age of consent laws.

“Someone said ‘hold this real quick’ and then they proceeded to snap pics,” Mistee Denson, a Columbia social work student and one of the organizers of the protest told Gothamist. “Someone quickly realized what it said and ran them off. Unfortunately, they got what they wanted.”

Jake Offenhartz, the author of the piece, said he tweeted out a photo “noting…that the banner was planted by the Alt Right—pedo is a favorite term of Cernovich’s crowd, which overlaps heavily with the pizzagate crowd; contemporaries of Cernovich, like Jack Posobeic, are known for such banner stunts.”

It only got weirder, and more concerning, from there, he reported:

In quick succession, Cernovich, Posobiec and other Alt Right luminaries swiped my photo, sending their own tweets without any mention that the banner was planted. The image was removed from Cernovich’s Twitter once I reported the copyright infringement, though that only fueled the firestorm: Paul Joseph Watson, a writer at InfoWars, then claimed that Twitter was censoring the #NAMBLAANTIFA image. As of this writing, his censorship-alleging tweet has been shared over 12,000 times, and liked by 10,000 people—including Donald Trump Jr.

They are trying to censor this image. It's coffin nails to the left. Retweet the crap out of it. Streisand effect! 🤗 pic.twitter.com/8adRZueldO

Many on Twitter were quick to point out that obvious troll is obvious.

hmm, where have I seen this bullshit tactic before pic.twitter.com/SpuJuKolPz

dude hanging out in the back of the protest with the rolled up poster. pic.twitter.com/r7R3QXjqEu

As BuzzFeed noted, you can see the banner suddenly appear at the head of the march at the 9 minutes, 45 second mark in the following Periscope video.

InfoWars, the conspiracy theory garbage factory led by Alex Jones, whom Trump has pledged not to disappoint, is still reporting the incident as legitimate.

Jones was forced to issue a rare apology recently for pushing the Pizzagate conpiracy theory when it resulted in a man shooting up the restaurant where it was claimed Hillary Clinton and John Podesta were running a child sex ring in the non-existent basement.