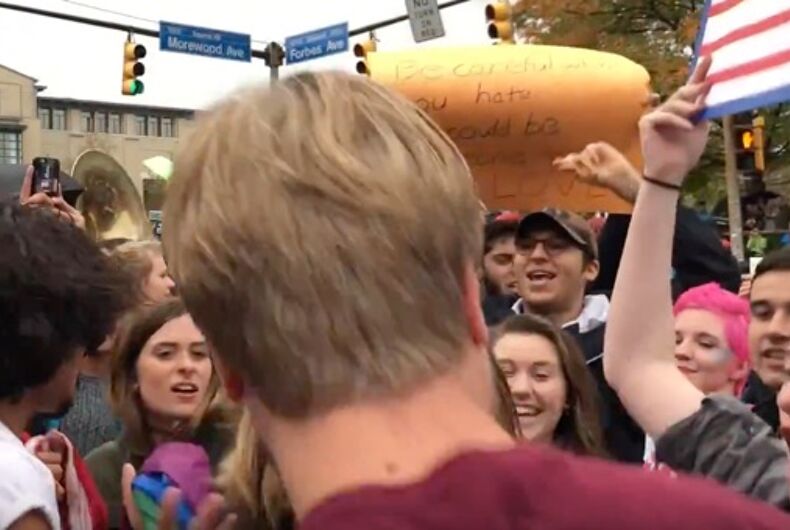 When the knuckle draggers at Westboro Baptist Church announced they would be protesting at Carnegie Mellon University in Pittsburgh, they had no idea what they would be facing.

While counter protesters are a common sight at the so-called church’s protests, students at Carnegie kicked it up a notch or twelve. While only four members of the hate group showed up to spout off anti-LGBT/Semitic/everything nonsense, the wet day still brought out a rainbow of counter protesters.

Over a hundred decent human beings faced off with the notorious hatemongers as police kept the groups separate. While common techniques to square off against the hate group members include “sponsoring” them to raise money for charity, surrounding and hiding them from sight with people wearing giant “angel wings,” and simply shouting them down, students and faculty used a different method. They used bagpipes, dancing, and a whole lotta love.

The hate group members “couldn’t handle the rain. They packed up and left early,” according to one attendee. When the group was met with resistance again at a local high school, they left after about an hour.

Me and the wifey at the Westboro Baptist Church counterprotest in Pittsburgh today. Let's just put it this way… Pittsburgh wasn't having it. The city showed up for love. Shirley Phelps and the rest of the clan couldn't handle the rain. ☔ They packed up and left early. #lovewins #fuckwestboro #godhateswbc #pittsburgh #412 #pghdoesnotcondoneyourhate #transpride #translivesmatter #transgender

What if straight couples got treated like gay people when they went on vacation?