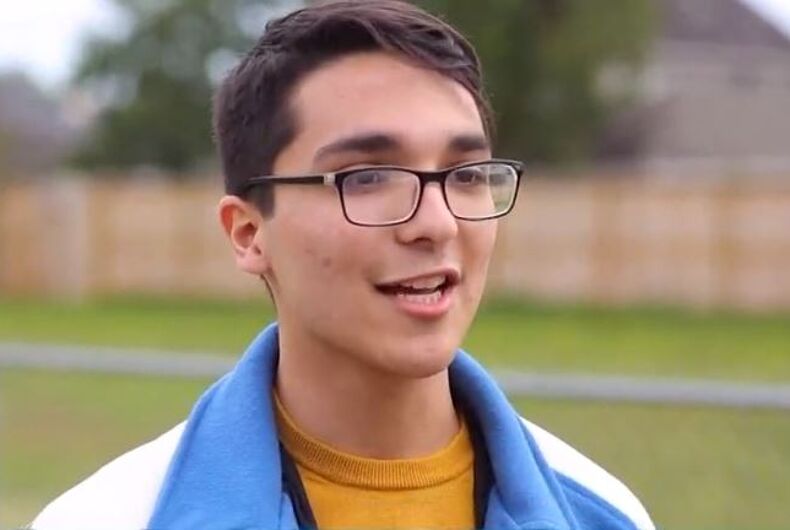 An openly gay student in Texas who was voted homecoming king has stood up to his bullies in royal fashion.

Joel Mireles, a senior at Brazoswood High School, in Clute, Texas, didn’t expect to win, despite campaigning for the honor. He told the local CBS affiliate that he is “just an average student,” and noted that it is usually someone in athletics, most often football, who gets to wear the crown.

Mireles, who is more interested in theater than sports, remembered the joy when he found out he won.

“I was shocked,” he recalled. “I didn’t really know what to do. Then one of the members of student council put the crown on me.”

But then his friends began to show him negative posts on social media from students who objected to the idea of their school having a gay homecoming king. One even made shirts reading “#NotMyKing” and a crossed out crown.

“I didn’t want to go eat lunch because I thought people were looking at me so I stayed in the theater classroom and told my mom to come pick me up early,” he said.

Then he decided he was going to rise above it and show the haters they couldn’t bring him down.

He bought one of the shirts himself and wore it to school.

“I just thought, if I bought one, it would be a statement saying, ‘This isn’t affecting me and you guys aren’t hurting me,'” he explained.

His older cousin shared a photo of him in the shirt, as well as his crown, and it has since gone viral.

“I was angry, almost in tears, but Joel reassured me, ‘It’s okay, it doesn’t bother me. I won! They can’t take that from me,'” she shared in the caption. “He was right, but I still felt something needed to be done for the terrible actions of these bullies.”

“I called the school and was told by the receptionist after she spoke to the principal that the ‘situation was taken care of’ and they had spoke to the kid making the shirts and Joel, but they couldn’t disclose if there were consequences,” she continued. “I asked if the principal could call me back. She never did. This was a week ago.”

“They never spoke to Joel, and there were never any consequences for the kids behind it,” she added. “What if Joel wouldn’t have been who he is? What if this ended in tragedy? Brazoswood needs to hold these kids accountable and stop avoiding this situation. You deserved that crown, Joel. Now I’m the one who looks up to your courage.”