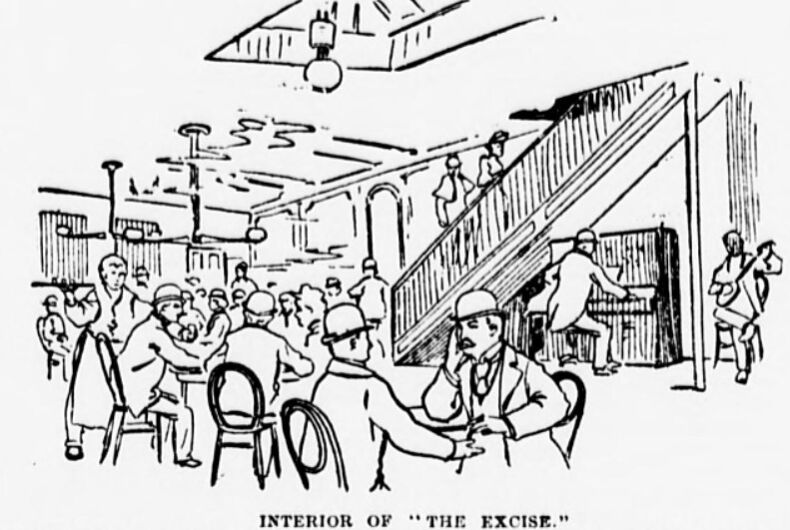 Photo: The Evening World via http://chroniclingamerica.loc.gov

The Slide was a bar of some notoriety that was open for a few years around 1890. It was known for its male waiters who wore make-up, sang ribald songs, and sometimes took female names and dressed as women. The clients weren’t all gay, but many were.

George Chauncey wrote about the “fairy” subculture of the late 1800’s in his book Gay New York. The Slide, the Excise Exchange, and other bars in Greenwich Village were key parts of this culture that celebrated male femininity among people who would probably be described as gay men and trans women today.

While people today are more likely to be familiar with the upper-class gay subculture that intellectualized love between men – think Oscar Wilde and his contemporaries – fairy culture, according to Chauncey, was decidedly working class.

Chauncey also points out that their understanding of sexuality was different than ours today, that they saw being gay as just an aspect of their gender identity and expression, unlike today where people generally see sexuality as something entirely separate.

The determinative criterion in the identification of men as fairies was not the extent of their same-sex desire or activity (their “sexuality”), but rather the gender persona and status they assumed. It was only the men who assumed the sexual and other cultural roles ascribed to women who identified themselves – and were identified by others – as fairies. The fairies’ sexual desire for men was not regarded as the singular characteristic that distinguished them from other men, as is generally the case for gay men today.

In 1890, the New York Press called the Slide “the wickedest place in New York.” The bar was able to stay open with bribes to the police, but that only made it a bigger target to reformers who eventually got the place shut down by the state.

The crowd moved to the Excise Exchange. It was the subject of a long, salacious article in The Evening World that described the clients:

The “attractions” at the Excise Exchange are not the women, but the class of men who frequent it. They imitate the dress and manners of women – paint their faces and eyebrows, bleach their hair, wear bracelets and address each other by female names.

The article also devotes a lot of ink to how “coarse” the songs were, and how the “abandoned and depraved” clients weren’t satisfied unless the songs were sufficiently “vulgar.”

No, there is no epidemic of kids pretending to be transgender

Kevin Spacey comes out as gay after sexual assault allegation