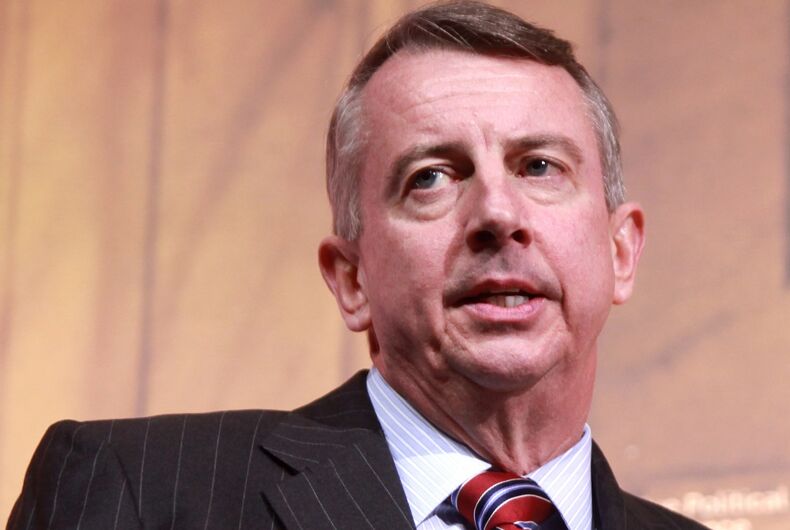 Ed Gillespie, who is the Republican candidate for governor of Virginia in an election this year, told a business group that he opposes HB2-style bathroom bills in order to get their endorsement.

The Northern Virginia Chamber said in a statement announcing their endorsement of Gillespie that he “vowed to oppose bills like North Carolina’s HB2 that would threaten Virginia’s reputation as an open and welcoming Commonwealth.”

HB2 in North Carolina mandated that people use bathrooms that correspond to the sex on their birth certificates in public buildings like schools. It also banned local governments from passing anti-discrimination legislation that protected LGBTQ people.

In an interview with the Washington Post, Northern Virginia Chamber president Jim Corcoran said that Gillespie made the promise in a private interview two weeks ago with the Chamber’s 25-member board. “We stated that we are an open and welcoming state here, we don’t want anything that is going to persuade persons that this is not a conducive place to do business,” Corcoran said.

Gillespie’s previous statements on trans rights were not supportive. In January, a campaign spokesperson said, “Ed doesn’t think girls should be compelled to share a locker room shower or hotel room on an overnight band trip with boys.”

“As governor, he would work with the Trump Administration to end the Obama Administration’s overreaching policy so parents and local school boards can enact commonsense policies to protect the safety and privacy of our children,” the spokesperson wrote in an email.

You know the left is so adept at using language. So they talk about bathroom bills. This isn’t about bathrooms alone. It’s also about compelling teenage girls to share locker room showers with teenage boys. It’s about compelling teenage girls to have to stay in a hotel with a teenage boy on an overnight band trip. And the fact is, we have to make clear, that we are going to protect our children from that. We are not going to allow for that to happen. I was very glad when Secretary DeVos and Attorney General Sessions came forward and repealed the federal government’s Obama effort to impose that on every school district in the country. And compel them to allow for boys to be able to use girls’ showers and locker rooms, boys to share overnight hotel stays with girls on band trips or other field trips.

His campaign insists that he has always opposed bathroom bills, but even campaign supporters like Virginia Christian Alliance president Don Blake didn’t get the message. “It’s a very dangerous thing to speak out on positions that offend your base,” Blake said. “To make a statement like that to get an endorsement from a business group will disappoint a lot of people.”

Gillespie is running against Democratic lieutenant governor Ralph Northam, a longtime advocate of LGBTQ rights who the Chamber endorsed four years ago. Gillespie’s opposition to union organizing and Northam’s support for increasing the minimum wage, though, resulted in the Chamber endorsing the Republican.

Ricky Martin gets emotional talking about Puerto Rico on ‘Ellen’

One night in 1969, a movement caught hold & has never let go