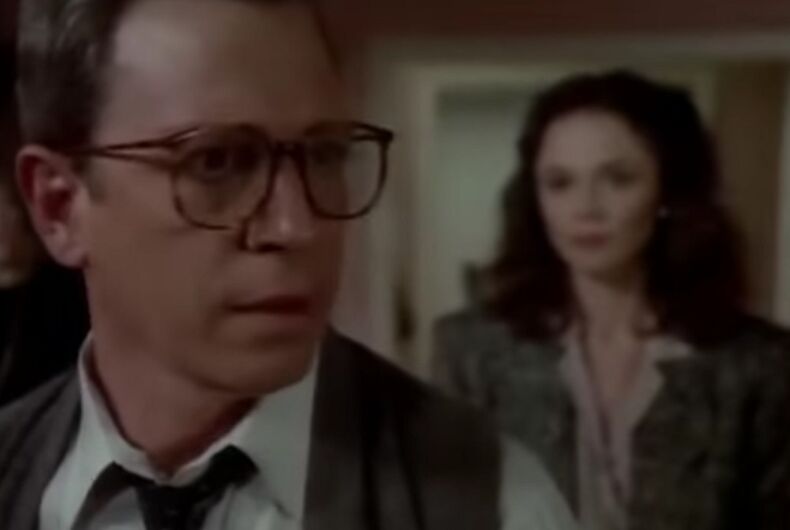 Charles Beaumont went on to write several episodes of "The Twilight Zone," including "Shadow Play."Photo: Screenshot/YouTube

In 1955, fourteen years before the Stonewall Riots, Playboy published a gay short story.

I read about it this past week in one of the many pieces written about the death of Playboy founder Hugh Hefner, so I found it online and read it.

“The Crooked Man” by Charles Beaumont is a dystopic sci-fi story that takes place 500 years in the future. In this world, the government monitors everyone’s words, people are born in labs, and heterosexuality is banned.

Everyone is assumed to be gay, and it’s straight people who are called “queers,” who lose their jobs if outed, and who get rocks thrown at them by children.

The main character is Jess Four Martin, a straight man who is waiting in a bar for his female lover Mina. He can’t meet with her anywhere else, or else the government will find out about them. They don’t even have private homes – everyone is required to live in dormitories.

At first glance, the story seems a bit homophobic. While waiting in the bar, the protagonist is approached by several gay men for sex, and they aren’t presented as particularly attractive or sympathetic. The future gays’ gestures of affection – like “the Tongue Dance” – sound pretty gross. The gays have also banned parks and books but have a daily “Orgy-time.”

Jesse has been researching how the world turned gay, and at one point he blames feminism. “We are not the unnatural ones, no matter what they say. I don’t know exactly how it happened – maybe, maybe as women gradually became equal to men in every way….”

So one way to read the story is as a “Look at the awful future in store if we stop enforcing strict gender roles” cautionary tale.

But that’s looking at it through a 2017 lens. In 1955, the very idea that people had a sexual orientation – instead of homosexual acts being a product of moral deficiency, social pressure, or mental illness – bucked the mainstream.

Beaumont’s description of being hunted down for who you love is actually pretty sympathetic. Take this passage:

Jesse sipped at the whiskey, remembering the Hunts. How the frenzied mobs had gone through the city at first, chanting, yelling, bearing placards with slogans: WIPE OUT THE HETEROS! KILL THE QUEERS! MAKE OUR CITY CLEAN AGAIN! And how they’d lost interest finally after the passion had worn down and the novelty had ended. But they had killed many and they had sent many more to the hospitals.

He remembered the nights of running and hiding, choked dry breath glued to his throat, heart rattling loose. He had been lucky. He didn’t look like a hetero. They said you could tell one just by watching him walk–Jesse walked correctly. He fooled them. He was lucky.

Beaumont also described the anxiety at being caught and the self-hatred that can result from being told, constantly, that you’re disgusting.

At the end of the story, Jess and Mina are caught by police and are told they will be forced to submit to “the Cure.”

They’ve got it down pat now–couple days in the ward, one short session with the doctors; take out a few glands, make a few injections, attach a few wires to your head, turn on a machine: presto! You’ll be surprised.

Even today, there are people who think that sexual orientation can be changed. It’s a horrifying idea, even if such a change could happen, because people can’t be forced to change a fundamental part of who they are without losing themselves in the process.

The story was rejected by Esquire, but Playboy published it. Many readers wrote letters of outrage, and Hefner wrote a response: “If it was wrong to persecute heterosexuals in a homosexual society, then the reverse was wrong, too.”

One night in 1969, a movement caught hold & has never let go

Ellen Page talks about a homophobic joke in ‘Juno’