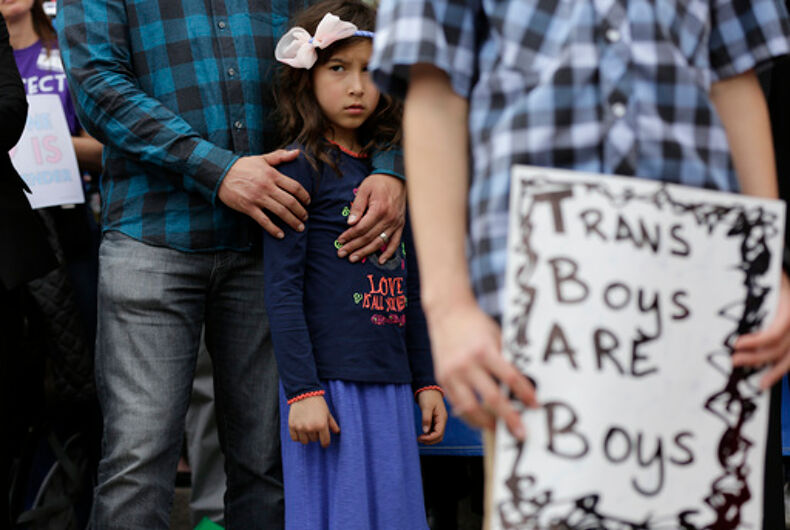 Libby Gonzales stands with her father, Frank Gonzales, as she joins other members of the transgender community during a rally on the steps of the Texas Capitol, Monday, March 6, 2017, in Austin, Texas. The group is opposing a "bathroom bill" that would require people to use public bathrooms and restrooms that correspond with the sex on their birth certificate. Photo: (AP Photo/Eric Gay)

The Daily Mail, a UK tabloid, published a sensationalist article that makes it seem like there’s an epidemic of young people pretending to be transgender.

Missing from the article is any public health professional who says that any such thing is happening.

Instead, the Daily Mail found a few parents who don’t like that their kids are transgender. Because apparently parents get to decide what their kid’s gender is.

This is all happening because:

Doctors fear being sued after the NHS [National Health Service] signed a ‘memorandum of understanding’ banning staff from challenging patients who believe they are born the wrong sex;

It’s weird how the right thinks that “X person fears being sued” means that that person is doing the wrong thing. There are lots of things that people don’t do at their jobs because they fear being sued. The vast majority of the time it’s good that those professionals aren’t doing things that could get them sued.

Teenage YouTube stars who enthuse about changing sex are making being transgender ‘cool’, according to parents;

What? YouTube is a bastion of understanding for trans people and it effectively eliminated transphobia throughout all of society? Let me go over and check the comments on a random video by a trans person….

Children being referred for transgender treatment on the NHS have surged to record numbers – there are now 50 a week.

I have no idea if that number is true, but, assuming it is, is it a lot?

There are about 66 million people in the United Kingdom, with an average lifespan of 82. If 50 people are referred to specialists for transitioning from now into perpetuity at an average age of 15, that means that we’re talking about 0.27% of the population seeing a specialist.

That’s lower than other estimates of the transgender population, and only part of that 0.27% would actually transition.

This is a common tactic for scaremongers – present a number like “50 a week” with no context for evaluating it. The UK is a big country. 50 people a week is not that many people.

And, also, if it were a big number… who cares? While the article repeatedly says that the parents in question aren’t transphobic, the only way a statement like “There are a lot of transgender people” is scary is if one assumes that being transgender is bad.

Hundreds of alarming stories have been posted over the past two months on an online forum set up by a father who says his teenage daughter is making a mistake in seeking to change gender.

Stop the presses! There’s a father who doesn’t accept his transgender son!

The father, who asked to remain anonymous, said: ‘The universal experience [of the parents] is that whether the child has been diagnosed with autism, depression or ADHD, the therapists are completely discounting any other symptoms.’

“My child has trouble getting their homework done on time, so they can’t possibly know their own gender identity.”

It’s understandable that a mental health professional would ignore these parents.

Stephanie Arai-Davies, who runs Transgender Trend, said: ‘I would estimate that we’ve been contacted by more than 100 parents over the past two years. What parents are saying is they’re deeply worried that NHS counsellors and therapists are immediately suggesting an appointment with a gender identity clinic.’

Without the common transphobic trope of equating seeing a specialist with forced surgery and hormones, it’s hard to see what’s wrong here.

Seeing a specialist is the first step in a long process, and for some people it’s the last step. In fact, if these parents have actual concerns and aren’t just transphobic, then they’ll have more luck exploring them with a specialist than with a general practitioner.

But teenagers are putting their problems down to confusion over their gender after being ‘brainwashed’ by social media sites promoting being transgender.

Is there anything that parents won’t blame on Facebook these days?

‘I said I know she wants a referral to a gender clinic but I have concerns that I want to talk about before any referral,’ [one parent] recalled.

‘I’ve known my child for 15 years and he only saw her for 40 minutes yet he thinks he knows everything about her and is blindly accepting that she wants to be a boy.’

Yeah, what’s up with these mental health professionals thinking they know more than the rest of us about mental health?

The mother-of-three said the therapist refused to listen to her worries that her daughter had been ‘groomed’ by a gay, male friend.

Maybe because the idea that gay men “groom” unsuspecting cis people into being trans is ridiculous and not worth listening to?

After two appointments, the mother complained to CAMHS about the therapist and the family stopped seeing him. However, the teenager – now 17 – was eventually referred to a gender identity clinic and against her mother’s wishes has started taking testosterone which she ordered online.

And somehow the Daily Mail thinks this story is proof that 17-year-olds cannot know their own gender identity.

The article has another story of a mother who thinks that her son isn’t a boy but instead has anxiety and was turned trans by Facebook.

But the psychotherapist still continued to push the parents to refer to their child as ‘he’ and even allow the teen to bind her chest. The mother added: ‘They just weren’t listening to the one person who knows their child best. I was saying, “I know her – you don’t.”’

Yeah! What do psychologists know about mental health! And what to teenagers know about their own bodies and minds!

Parents are always right, that’s why every gay person whose sexuality wasn’t accepted by their parents turned out to be straight.

A month ago the mother took her daughter to a private mental health service where the psychologist shared her scepticism about the girl wanting to change sex.

You know, there is a good article to write about this anonymous mother, except it’s about doctor-shopping.

The youngster now rarely mentions wanting to be a boy.

That doesn’t mean what the Daily Mail thinks it means.

It might seem like this isn’t a big deal, since the Daily Mail is a garbage tabloid. But not only does it matter because it’s a widely-read publication, it’s also just one of many attempts by the media to say that trans people don’t know who they are.

The Slide and the Excise Exchange: NYC’s premier gay bars… in the 1890’s