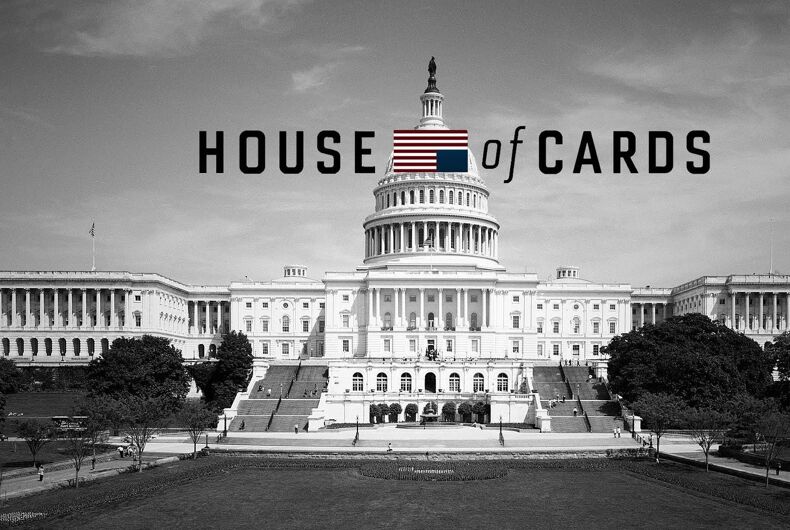 Netflix has announced that they will end their hit show “House of Cards” after this season. Shooting is currently under way in Baltimore for season six.

Star Kevin Spacey has been engulfed by out actor Anthony Rapp’s allegation that Spacey sexually assaulted him over 30 years ago. Rapp was 14-years-old at the time.

Rapp, who has been doing theater for most of his career but is currently playing the role of Lieutenant Paul Stamets on “Star Trek: Discovery,” related the entire story of the incident to Buzzfeed, which he says happened when he was 14 and working on his first Broadway play and Spacey was 26.

Spacey acknowledged the allegation on Twitter, but said he didn’t remember the incident. He also took the opportunity to come out of the closet as gay in a desperate attempt to deflect attention away from Rapp’s sexual assault charge.

“Media Rights Capital and Netflix are deeply troubled by last night’s news concerning Kevin Spacey,” according to a joint statement released by Netflix and producer Media Rights Capital. “In response to last night’s revelations, executives from both of our companies arrived in Baltimore this afternoon to meet with our cast and crew to ensure that they continue to feel safe and supported. As previously scheduled, Kevin Spacey is not working on set at this time.”

Several celebrities and LGBTQ activists have condemned both Spacey’s actions and his attempt to swing the story by coming out. Out actor Zachary Quinto had one of the most deft takes on Spacey’s spin.

“It is deeply troubling that this is how Kevin Spacey has chosen to come out,” Quinto wrote on Twitter. “Not by standing up as a point of pride – in the light of all his many awards and accomplishments – thus inspiring tens of thousands of struggling LGBTQ kids around the world, but as a calculated manipulation to deflect attention from the very serious accusation that he tried to molest one.”

While neither Netflix nor Media Rights Capital specifically said that they were ending the show thanks to the explosive allegations against Spacey, the series launched Netflix’s entrance into original programming. Canceling a show that has garnered 53 Primetime Emmy nominations isn’t done lightly and the announcement is being widely seen as the company’s way of backing away from Spacey.

Filming for season six will begin soon in Maryland. The final season will air in 2018.