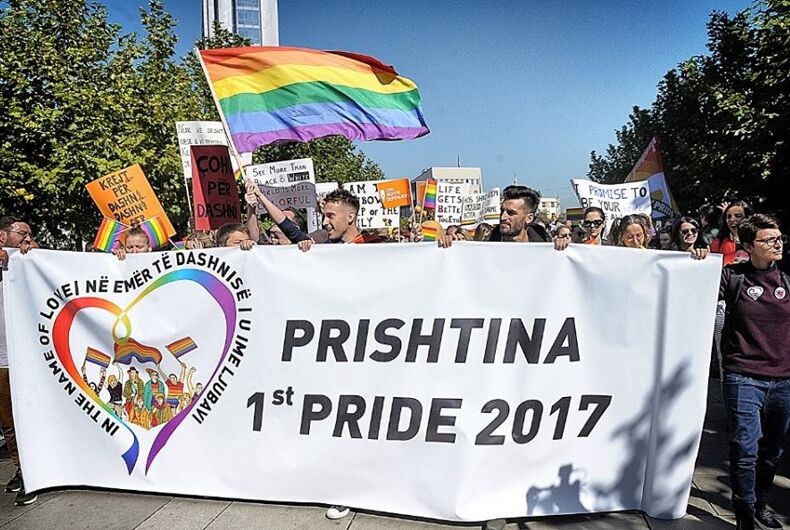 Kosovo holds its first ever pride parade, under the theme "In the name of love."Photo: Facebook/EULEX Kosovo

Kosovo ignored the hate and celebrated its first pride parade on Tuesday, under the theme “In the name of love.”

About 300 people marched through the capital, Pristina, chanting, “There is no gender in love.”

Hateful messages directed at the event were reportedly prevalent on social media and elsewhere.

On the night before the event, an email was sent to local media outlets threatening participants if they went ahead with the parade.

“In the name of morality, kill those who are immoral,” it read, warning people to stay away from the area, or else “share the same fate as those who go out on that day.”

The event went off without incident, besides a group of young people who protested the march.

“We will not allow anyone in Kosovo to impose fear and threats against any individual or against any group,” said President Hashim Thaci at the start of the event, which took place on the final day of Pride Week.

“We are here to send love, including to those who are against us, as we believe in diversity and keep love also for those who hate us,” said Lendi Mustafa, one of the organizers.

U.S. Ambassador Greg Delawie was also present at the march, and told the crowd he was “happy to see so many people today, so many suppporters.

“I want you to know that the U.S. Embassy stands with you,” he added.

There have been small marches and demonstrations over the past three years, supported by politicians and diplomats, but this is the first official pride parade, the Associated Press reports.

The Muslim majority country passed anti-discrimination law in 2004 protecting on the basis of sexual orientation. Gender identity was added in 2015.

However, a recent study by the National Democratic Institute found that Kosovo exhibits the most anti-LGBTQ sentiment of all countries in the region.