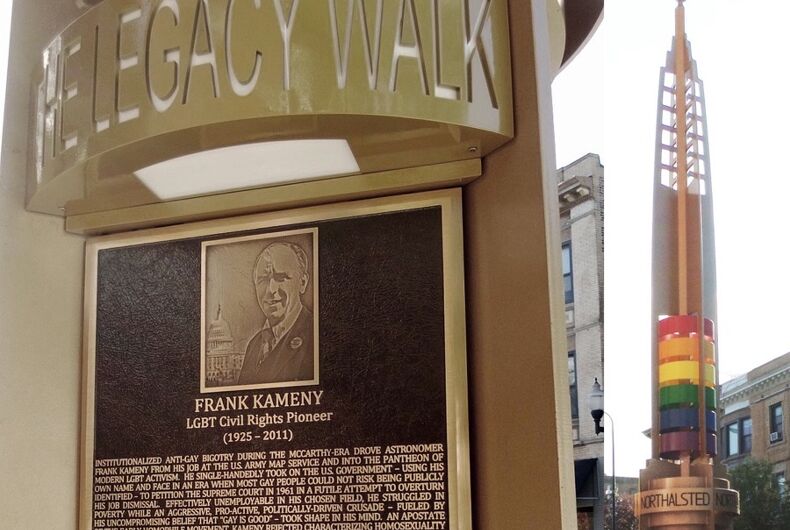 During an episode of the revival of TV’s Will and Grace, Will’s thrill that a 23-yr. old is attracted to him stalls when the Generation Zer who came out to his parents when he was eight reveals he’s not certain what either Stonewall or Stonehenge are.

The scene fades with Will choosing teaching over hooking up. “The history of our people is a rich and complex tapestry. . . .”

For several years, many people, most volunteers, have worked tirelessly to uncover and display that tapestry. But there are barely a handful of brick and mortar places around the world where those who want to see it can go, and those few opportunities are diminished further by limitations of space and days and hours they’re open.

A unique alternative was dedicated in Chicago on National Coming Out Day in 2012: the Legacy Walk, the world’s first “outdoor museum” of LGBT history; in the words of creator Victor Salvo, “to leapfrog over the education system which has failed us.” Eighteen LGBTs who made significant contributions to world history and culture were selected, and bronze memorials featuring their bas-relief images were unveiled on 25-ft. tall “rainbow pylons” the city of Chicago installed in 1998 on North Halsted in its largest LGBT neighborhood. Each was underwritten by individuals, nonprofits, or corporations such as Levi’s.

Some had Chicago ties. Oscar Wilde gave two lectures there in 1882. In 1889, Jane Addams, whose social justice activism would win her the Noble Prize in 1931, opened Hull House on South Halsted with her then-partner, Ellen Gates Starr, to provide healthcare, daycare, and education to the neighborhood poor.

Biographer John D’Emilio recalled that when a University of Chicago barber refused to cut Bayard Rustin’s hair in 1942, “he conducted a spontaneous sit-in that turned into a larger protest until, finally, the barber acceded and cut Rustin’s hair.” He often returned to the city to help in the fight for black civil rights, particularly integrated housing which spawned an attack by thousands of whites in 1951 on a Chicago subdivision apartment building where only one black family lived. His surviving partner, Walter Naegle, attended the 2012 unveiling of his memorial.

Before she became one of the Movement’s pioneering activists and an expert on gay literature, Barbara Gittings was first called “lesbian” during her freshman year at Northwestern University in 1949 in the suburb of Evanston, soon flunking out because she spent more time in libraries trying to find out more about what that meant than in classes.

In June 1953, just four months after returning from gender confirmation surgery in Denmark, transgender pioneer Christine Jorgensen flew from Bloomington, Indiana to Chicago where she told reporters of having given her sex history to Kinsey. One article was titled, “Dr. Kinsey Gets Christine’s Report; Poses New Problem For Fact-Finding Medico,” and snidely purred that Jorgensen “might be in both of Dr. Alfred C. Kinsey’s books on the sexual behavior of men and women.”

And 1977’s Chicago Pride Parade was led by Leonard Matlovich, the first gay service member to out himself to fight the military ban. Ironically, that year’s theme was “Gays in History.”

Since then, the Legacy Walk has added several figures including Frank Kameny, father of the modern gay rights movement, whose motto “Gay Is Good” was adopted at the 1968 meeting of the North American Conference of Homophile Organizations (NACHO) in Chicago. In 1974, photos of Kameny streaking a Chicago event were sold to raise money for victims of the UpStairs Lounge fire in New Orleans.

Lorraine Hansberry, a Chicago native whose award-winning, still moving play and film A Raisin in the Sun is set in the same neighborhood from which her parents had to appeal to the Supreme Court to prevent their being evicted from a previously all-white subdivision in 1940, is also part of the tributes.

Each memorial is lit at night, so anyone simply walking down the street anytime is presented with multiple opportunities to learn a little bit of our people’s history dating back more than a century. Several are the only memorials anywhere to their subjects or the only ones identifying the subjects as LGBT.

The Legacy Project Education Initiative, in partnership with Illinois Safe Schools Alliance, provides students guided walk tours, an interactive website, teachers’ guides, and lesson plans about each honoree and dozens of other LGBTs across the centuries. A GLSEN study demonstrated that such programs help to increase the self-esteem of LGBT youth and lessen the incidence of bullying in schools and communities by encouraging a culture of mutual respect.

Salvo recently addressed how much more important the Walk is in 2017. “In an era when the terms ‘Fake News’ and ‘Alternate Facts’ have become the new realities in a post-Truth world it is imperative that we remember that LGBT people have—for time immemorial—been the victims of ‘Fake News’ and ‘Alternate Facts’ that have created a mythology about us that has destroyed far too many lives and empowered tyrants. We are the poster children for what happens when this mentality is allowed to run amok. Our solution is to speak truth to power and to put our reality out there and to work doggedly to bring our stories out into communities so conversations—and healing—can begin.”

Michael Bedwell is a historical adviser to the non-profit Legacy Project.