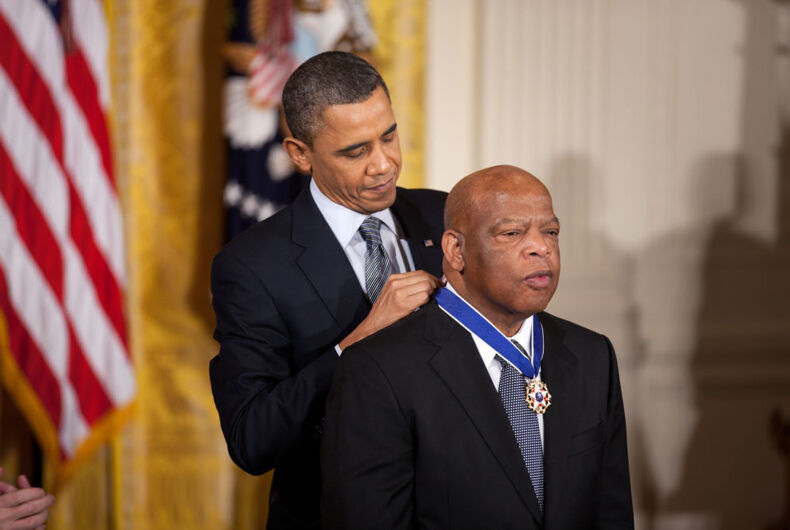 President Barack Obama awards the 2010 Presidential Medal of Freedom to Congressman John Lewis in a ceremony in the East Room of the White House, Feb. 15, 2011.Photo: Official White House Photo by Lawrence Jackson

When President Barack Obama linked Selma, Seneca Falls and Stonewall in his second Inaugural Address, it was a connection that hit home for Congressman John Lewis.

For more than six decades, Lewis has been on the front lines of the fight for social justice — whether it’s racial equality, the women’s movement or LGBT rights.

Lewis began his work in the civil-rights movement in the 1950s, and quickly became a national leader. He was the youngest of the “Big Six” — a national group of movement leaders, alongside Dr. Martin Luther King, Jr., who organized the 1963 March on Washington — and an original Freedom Rider.

Lewis led hundreds of civil-rights marchers into Selma, Alabama, in 1965, in a demonstration that would come to be known as “Bloody Sunday,” as protesters were beaten and tear-gassed by police; Lewis still bears the scars of a skull fracture suffered that day.

Lewis parlayed his protests into politics, rising from a city council member in Atlanta to a member of the U.S. House of Representatives, a role he has held for more than 30 years. During that time, Lewis has been a constant ally to and advocate for LGBT causes.

LGBTQ Nation sat down with the Congressman to explore his view of the evolution of American equality.

QN: You led a congressional sit-in following last summer’s shooting at an LGBT nightclub in Orlando. What did that accomplish, and do you think something like that would be effective again, given the events in Las Vegas?

JL: Dr. Martin Luther King once said, “The time is always right to protest for what is right.” We have had too much gun violence, lost too many people. After Orlando, and after the sit-in on the House floor, we thought we’d see some action on the part of the House and the Senate, but we have not seen any action. We have not moved.

Even now, with what happened in Las Vegas, people are saying, “It’s too early to do something.” We have to do something. As I said on the steps of the Capitol today, we lost too many mothers, fathers, sisters and brothers, too many of our friends. The time is right for action.

We will be engaged in some form of non-violent protest at the Capitol or in some building because we cannot wait. We cannot see more and more people being murdered at a concert, a dance hall, in a school, in a church, a mosque, a temple. We are determined to put control of the proliferation of gun violence on the Congressional agenda. The American people are demanding it. They want us to act, to do something.

QN: Switching gears, you have degrees in religious studies. What do you think can be done to close the chasm between the LGBT community and some religious communities?

JL: I think it’s important for members of religious communities to understand and know that members of the gay community are part of the human family.

I grew up in a Baptist Church. I attended churches of all kind in Atlanta, in Nashville. People shouldn’t discriminate against someone who is gay or put someone down. Many of the members in our churches, in our religious institutions, are gay.

The church is supposed to preach the gospel of love, the gospel of peace, the gospel of sisterhood and brotherhood, that we are one family — that we all live in the same house, not just an American house but a world house. As Dr. King said, “Learn to live together as brothers as sisters. If not, we’ll perish as fools.”

The church needs to learn and understand that there is not any room in our society — or any society — to discriminate against someone because of sexual orientation.

QN: You’ve been fighting for civil rights, particularly racial justice, for decades. What are your thoughts on the current state of race relations in this country, compared to 60 years ago when you started this work? What’s changed and what hasn’t?

JL: We’ve come a distance and made a lot of progress. When I was growing up and getting involved in the movement, you would see signs: “White men” and “Colored men,” “White women” and “Colored women.” In 1961, the year President Obama was born, blacks and whites couldn’t be seated together on a bus leaving Washington, D.C., and traveling through the South. We were arrested. We were jailed. We were beaten.

But today, the signs are gone and the only places we see those signs are in a book, on video or in a museum. So we have come a distance. We made progress. People who say we haven’t, I feel like saying to them, “Come walk in my shoes.” People can register to vote now where during the 1950s and ’60s they were beaten, arrested, jailed. Some people were murdered when they attempted to register to vote or encouraged others to register.

There are folks who are trying to make it harder, to undo the progress we’ve made. What happened in [Charlottesville] Virginia a few weeks ago traumatized this country more than anything in recent years. The scars, the stains of racism and bigotry are still deeply embedded in American society.

It’s a constant struggle for us to redeem the soul of America — during the movement, we called it “a beloved community.” I believe we will get there. I think many members of the gay community today are playing a major role in helping us get there, along with women’s groups, young people, children.

I believe our finality will be the young — middle school, elementary school, high school, college. They will help us get there, to lay down the burden of sexism, bigotry, hate, anti-Semitism. We will get there. I’m very optimistic.

QN: What do you say to those who don’t share that optimism, in light of the current administration?

JL: I say over and over to people — young people and not so young — that, in spite of everything that has happened, you must be hopeful. You must be optimistic. If you lose hope and you lose optimism, it’s like you don’t exist, like you are dead. You cannot afford to lose it.

Right after the election, people would come up to me and say, “Congressman, I’m so down, so down.” They’d walk up and say, “I need a hug.” I said, “I need a hug too,” and we all hugged. But we have to get up — keep picking up and putting down and keep saying, “I’m going to keep the faith, keep moving, keep hoping and keep building that sense of community for the common good.”

Jen Colletta is the editor of Philadelphia Gay News.