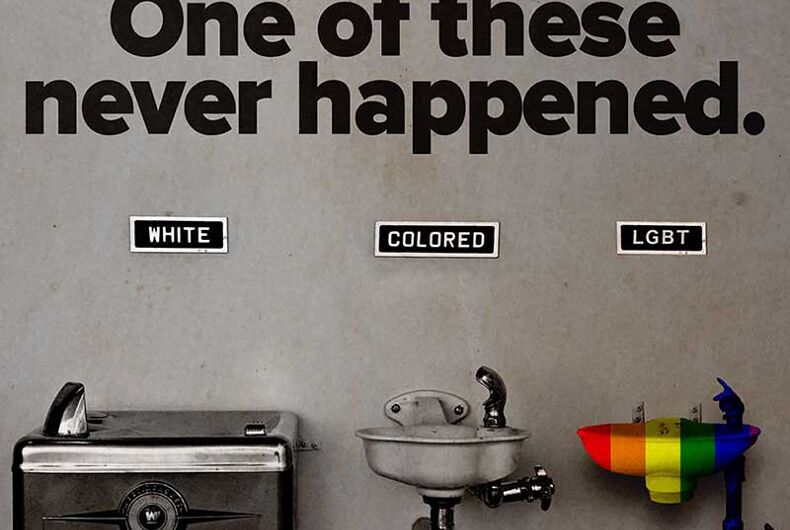 Poster from the Family Research Council to attempt to drive a wedge between African-Americans and LGBTQ people.Photo: Public domain

The right wing loves to condemn Saul Alinsky’s transformative progressive organizing book, Rules for Radicals, but the Family Research Council and other hate groups’ latest stunt employs a strategy straight from Alinsky himself. The groups are using African-American ministers to argue in favor of allowing businesses to refuse service to LGBTQ people.

Rule #12: “Pick the target, freeze it, personalize it, and polarize it.” Cut off the support network and isolate the target from sympathy.

FRC leader Tony Perkins is crowing after holding a joint press conference with conservative African-American ministers who condemned the LGBTQ community for daring to say we want civil rights. But the way they did it, by repeatedly saying that the fight for LGBTQ civil rights doesn’t measure up to the battle for racial equality.

“Tired of hearing the LGBT community compare its experience to the real suffering of the civil rights movement, church and civic leaders decided to speak out…” the Perkins said in a press release. “FRC’s Dean Nelson and FRC Action’s Patrina Mosley spoke, sharing deeply personal stories about the pain and prejudice their families experienced over the color of their skin. Patrina talked about how insulting it is to hear LGBT activists equate their ‘persecution’ to generations of African Americans.”

According to Religion News Service, “ex-lesbian” Janet Boynes, who runs an ex-gay “ministry,” was one of the speakers trying to separate the two communities with false equivalencies.

“I resent having my race compared to what other people do in bed,” she said. “There is no comparison. It only trivializes racial discrimination.”

There are, of course, radical differences between the history of the struggle for both LGBTQ and black civil rights. The fight for equality, however, remains the same and, for LGBT people of color, the struggle is even harder – even without right wing hate groups trying to cause division.

If you had any lingering doubts about the importance of doing intersectional work to tie various progressive communities and causes further together, this should be a red flag. “Divide and conquer” is a successful strategy when successful.

Our job is to make sure it doesn’t by coming closer together instead of drifting apart.