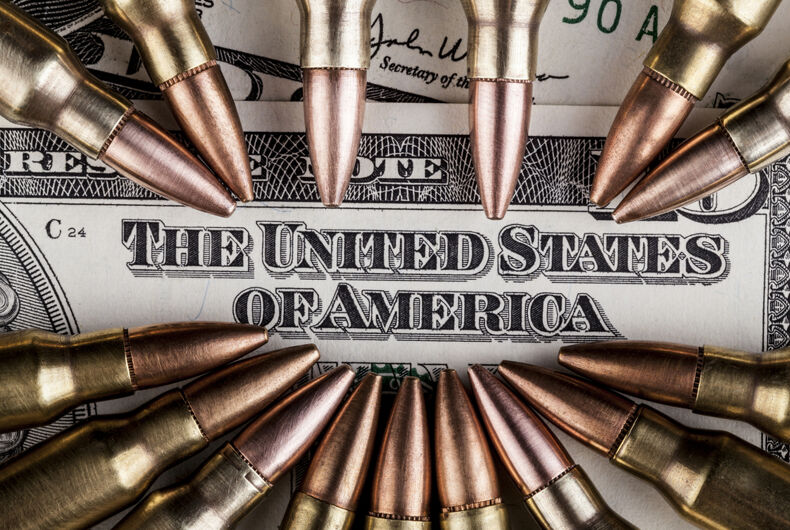 So after suffering the effects of yet another mass shooting in our country, this time in Las Vegas, Nevada where currently over 50 people have died and approximately 500 others were wounded, let’s look at the firearms laws in the state of Nevada.

The suspected shooter had with him over 10 firearms at the time of his attack on a crowd attending an outdoor country music concert in Las Vegas.

After each incident of mass shootings, we hear the obligatory “I send my thoughts and prayers to the survivors and to the loved ones of those who have died” coming from politicians and other officials. Well, I hate to break it to you, but “thoughts and prayers” simply aren’t cutting it! They aren’t helping to reduce the chances of another incident tomorrow or next week or next year.

Each time I hear of another incident of gun violence in a long and tragic chain, I think back to the very first thing that caught my eye as I entered the grounds of the Ames, Iowa Republican Party Presidential Straw Poll in the summer of 2011. Three young children, I would guess between the ages of 4 -7, sporting day-glo orange baseball caps with “NRA” imprinted atop, and round stickers on their small T-shirts announcing “GUNS SAVE LIVES.”

But, really, do these “guns save lives?” Do laws expanding gun possession, concealed or not, actually “save lives”?

According to the U.S. Centers for Disease Control and Prevention, gun-related violence has reached epidemic proportions in our country by snuffing out the lives of upwards of 30,000+ people and wounding many more annually. On average, guns end the lives of more than 80 people in the United States every day.  Each year, gun violence affects over 100,000 people in some way.

Many of the guns used in these killings reach military level weapons power, guns which currently remain legal. Today in the United States, there are 88.8 firearms per 100 people.

Of the increasing number mass murders in the United States since 1982, most of the shooters obtained their weapons legally. Demographically, the shooters in all but a very few cases involved males, usually white, with an average age of 35 years.

Should any limits be placed on the Second Amendment of the United States Constitution, which reads: “A well-regulated militia being necessary to the security of a free State, the right of the People to keep and bear arms shall not be infringed”?

We seem somehow only to spout the second clause in that sentence while forgetting the first, especially the term “well-regulated”!

I propose that we reevaluate the political right’s obsession with the so-called “freedom” to bear arms because it is not only “criminals who kill people” as Second Amendment advocates claim. Therefore,

To be perfectly honest, though, I want the Second Amendment repealed! It is an Amendment for goodness sake. It is not some sort of divinely-inspired mandate from a superior being well beyond our comprehension. It was created, rather, by our intelligent but flawed “founding fathers” who probably did not want totally unlimited and unrestricted rights to bear arms.

Even if they did advocate for unrestricted firearms ownership, these are the same men who owned slaves, committed genocide against and expelled native peoples, withheld enfranchisement from women, engaged in and killed one another in duels, and so on. Actually, I’m really surprised the National Rifle Association hasn’t advocated for the return of lethal dueling matches. Maybe that’s next on their agenda. (Go see the Broadway show “Hamilton” to see how that turned out!)

As we all know, in the current political climate, the chances for comprehensive common sense gun control in the United States is only a pipe dream as long as the National Rifle Association controls Congress and state legislatures, for if they did not, we would have seen effective laws passed years ago resulting in countless lives saved.

When you mix toxic masculinity with American culture, you’ll get gun nuts every time