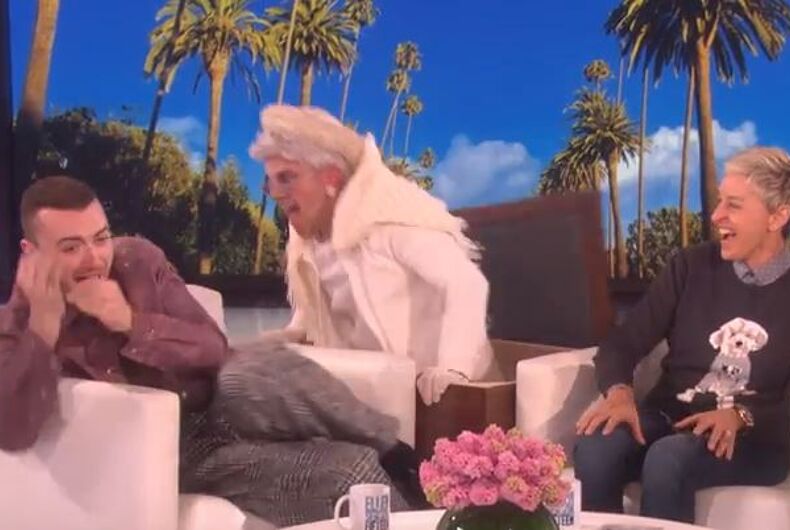 Sam Smith gets the (second) scare of his life on "Ellen."Photo: YouTube/The Ellen DeGeneres Show

Sam Smith learned a valuable lesson for any guest appearing on The Ellen DeGeneres Show: Never let your guard down.

Smith, who recently came out as gender-fluid, was in the middle of telling Ellen about how he believes his home, a former school, is haunted.

What better time, then, for the prankster to spook the singer?

A man in a white sheet crept up from behind to scare him, doing a pretty effective job. Especially since, as he said, he was waiting for someone to instead pop out from the table between the two. And then, just as sure as he predicted it, out popped yet another frightening figure.

Then, before throwing to commercial, she made Smith watch it all over again.

Smith also addressed the controversy surrounding his 2016 Oscar acceptance speech, which it turns out was fueled by a hip flask of tequila.

“I basically said that I was the first gay man to win an Oscar,” he recalled, covering his eyes in embarrassment.

It didn’t take him long to realize his mistake.

“Afterwards I saw Elton John at the after party, and he was like, ‘I’ve won an Oscar,'” he remembered. “I was like, ‘I’m sorry, I was young when you won your Oscar.'”

“I’m joking,” he added, least anyone think he really said that to John.