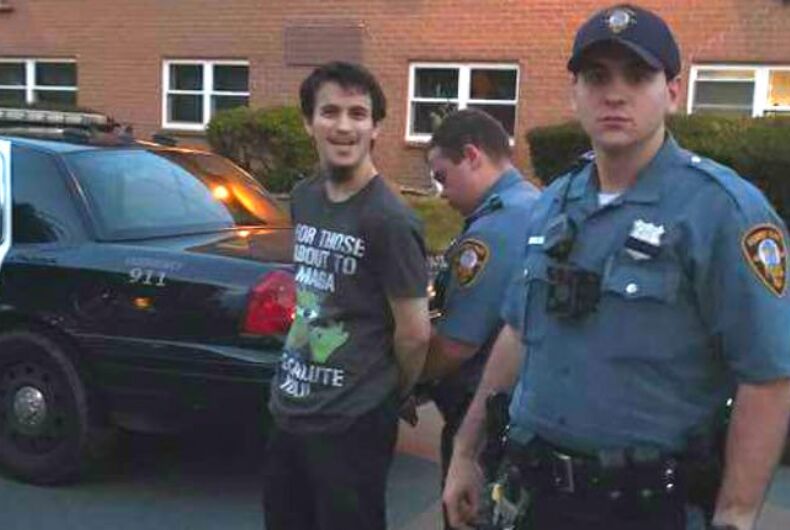 Morris May being arrested by Asbury Park police officers after pepper spraying a transgender person without reason.Photo: Garden State Equality

Morris May, a 22-year-old self-described “former progressive,” was arrested after he pepper sprayed a transgender person attending a sign making party before a peace rally. He was charged with aggravated assault and possession of a weapon for an unlawful purpose.

Allie Kolarik was making posters for the Stand Against Hate rally in Asbury Park, New Jersey, when May and his younger brother showed up sporting a Trump 2020 sign and wearing a t-shirt featuring Pepe the Frog. The cartoon character has been adopted by the so-called alt-right as a mascot for white nationalism and anti-Semitism. The shirt said “For those about to MAGA [Make America Great Again] we salute you!”

After the brothers egged on the LGBT activists, a yelling match ensued. May maced Kolarik and is claiming self-defense – even though there were no threats of violence.

“I did do that,” May told the Asbury Park Press. “This person, I don’t know if it was a woman or a man, came up to me and violated my personal space. She called me a Nazi and began screaming in my face. I told her to back up and I gave her one last warning before I sprayed it on her or it.”

Kolarik, who identifies as non-binary, said May was the aggressor.

“He was saying, ‘I hate liberals, I hate you people’,” Kolarik said. “‘You’re trying to take away our rights.’ When I asked him, ‘What rights?’ he had no answer.”

May fled the scene and split up from his brother, but police arrested him within minutes of the attack. He was released after six hours and will appear in court in early October.

May’s father is Chinese and his mother is Jewish.

Donald Trump possesses the opposite of the Midas touch