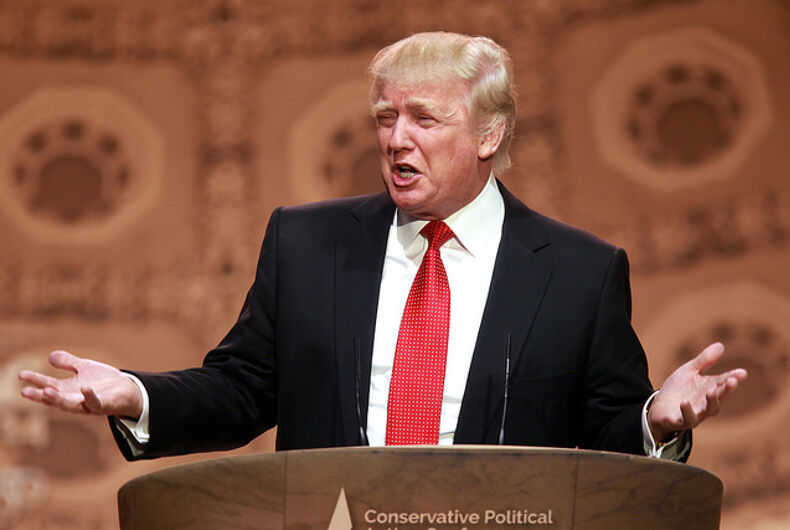 The Trump Administration has gotten into a habit of issuing bad news and making outrageous statements on Fridays, so the NCTE has already released a statement responding to whatever Trump may end up saying.

Whether releasing major guidance to purge transgender service members, pardoning a notorious racist and civil rights violator or the tacit endorsement of Nazism in America, NCTE wants to get ahead of the White House for yet another pre-weekend news dump that will likely hurt good people.

As the NCTE says, the weekly dose of bad news is not always about transgender people. Last Friday, Trump pardoned Joe Arpaio, who was found in contempt after he defied a court order to follow the Constitution. On Friday, August 11, Trump tweeted that “Military solutions are now fully in place, locked and loaded” regarding North Korea.

“By condemning the President’s inevitably divisive rhetoric/action in advance, however, we hope to provide a sobering counterpoint to this Administration’s discriminatory agenda and prevent their actions from being buried among this weekend’s news coverage,” the NCTE statement said.

One reason politicians often release bad news on Fridays is because journalists and pundits often don’t work on the weekends and are less likely to report on a story that is several days old on Monday.

“It’s Friday, Friday, gotta get down on Friday,” popular musician Rebecca Black once wrote, speaking to the nation’s attitudes about Friday. “Everybody’s looking forward to the weekend, weekend.”

The NCTE says that their statement is meant to make the media’s job easier. “News outlets won’t need to scramble to find expert commentary and guests to respond to the latest, outrageous tweet / statement / directive from the White House this weekend.”

It is not yet known what Trump will announce today. He may end the Deferred Action for Childhood Arrivals (DACA), an immigration program that allowed around 800,000 undocumented immigrants who entered the United States as minors to stay if they met a number of requirements. Or he might block Mexico from helping disaster relief efforts in Houston. Or he might announce that he is firing Robert Mueller, who is investigating Russian collusion with Trump’s 2016 campaign for the Justice Department.

“Odds are high that NCTE and most Americans will be against” whatever Trump announces today, the NCTE said.

Indeed, being prepared for the Friday bad news dump means that media organizations can “get down on Friday” sooner.

Should LGBT people try to restrict the speech of neo-Nazis & other deplorables?