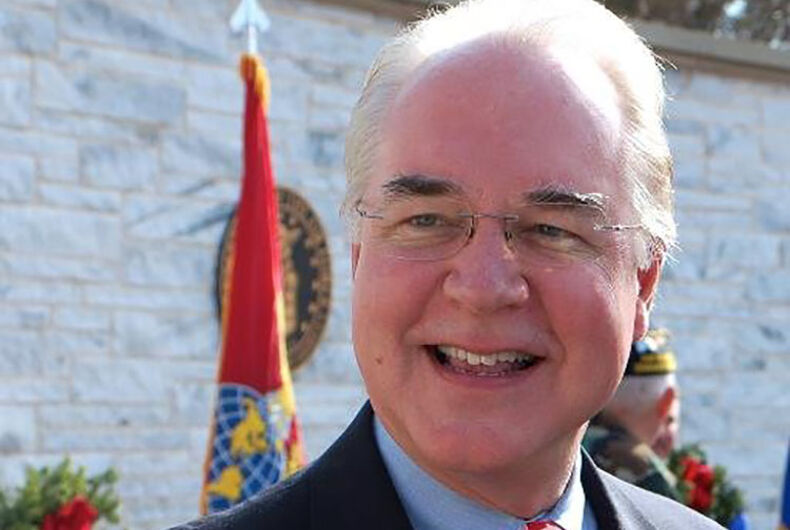 Health and Human Services Secretary Tom Price is out of a job after being engulfed in scandal for his jet-setting ways. The millionaire chartered private and military flights costing over $1 million since assuming his role in President Donald Trump’s cabinet.

Price, who is one of Trump’s anti-LGBT staff picks, has been given the boot for making the boss look bad (it’s hard to claim you’re “draining the swamp” when your cabinet secretary is living it up like a rock star) in the midst of Trump’s new tax plan rollout.

What didn’t sink his chances in the administration was his heartless attempts to undermine Obamacare, raise the cost of medication and treatment for people with HIV, and exclude anyone with a pre-existing condition from being able to afford medical insurance.

His long record of anti-LGBT activism as a Congressman also didn’t affect his chances of success with the motley group of religious right fanatics and Wall Street fat cats that populate the Trump administration. Instead, it made him palatable to both Trump and Pence.

“After decades of targeting marginalized communities for his own profit, karma finally caught up with Tom Price,” Sarah Kate Ellis, President and CEO of GLAAD said in an emailed statement. “It’s a relief that an anti-LGBTQ activist like Price was removed from the Trump Administration’s highest ranks, but LGBTQ Americans must remain vigilant and prepare for the next nomination – as they could bring the same discriminatory agenda as the rest of the president’s picks.”

If the Trump administration was a reality show, it would be most like a televangelist program at this point. There’s lot of worthless shouts about Jesus, talk about poverty as a virtue, fleecing of the gullible out of their money and power, and, always, a self-satisfied conman sitting on top and spending all the money with a toady sitting beside him repeating his words.

And as soon as people start questioning the madness, someone’s got to go. It’s time for a casting change. Gotta get that spotlight back on the star before the audience starts heading for the exit.

See ya, Price. You should have comparison shopped on those plane fares.

Is Oprah going to run for president against Trump in 2020?