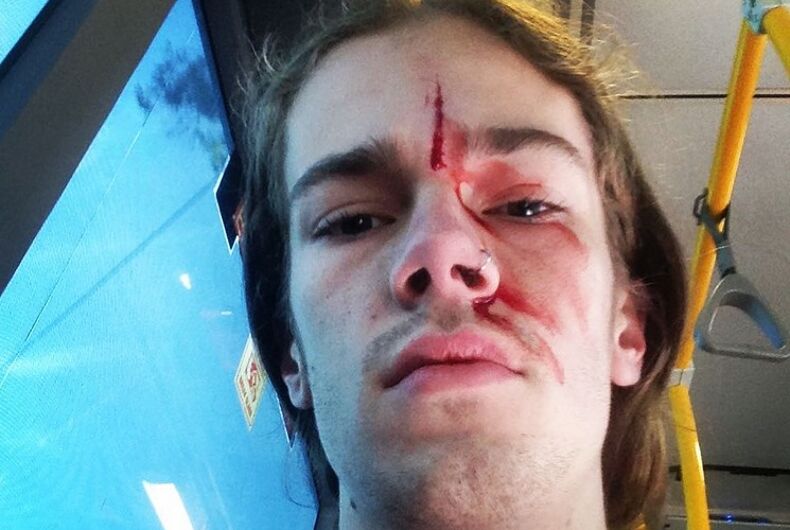 A 19-year-old man says that he was punched in the face when he confronted a homophobe tearing down rainbow flags last Tuesday.

The man, identified as former Australian prime minister Kevin Rudd’s godson Sean, said that he was attacked at a bus stop on Oxford Street, Bulimba, a suburb of Brisbane. He saw someone tearing down rainbow flags, and he confronted the person.

The Facebook page of Bulimba 4 Marriage Equality said that Sean confronted the man, who was yelling, “I hate fucking faggots.” Sean responded, “That’s OK, I don’t like you.”

The man asked Sean, “did you just call me a homophobe?” and Sean said yes.

The unidentified man then punched Sean.

Rudd posted a picture of Sean to Instagram, calling out the national, non-binding postal referendum on marriage equality for inciting homophobia.

So many warnings to Turnbull about what this postal vote could unleash. Now my godson Sean has been punched while sitting at his bus stop, for objecting when a man began ripping down rainbow banners and hurling verbal abuse. #voteyes #MarriageEquality #bravekid

The family are so grateful to Brisbane City Council bus driver who stopped, got first aid kit, and looked for perpetrator. https://t.co/5rWwORlayU

Queensland Police confirmed that there was an assault in Bulimba on a 19-year-old.