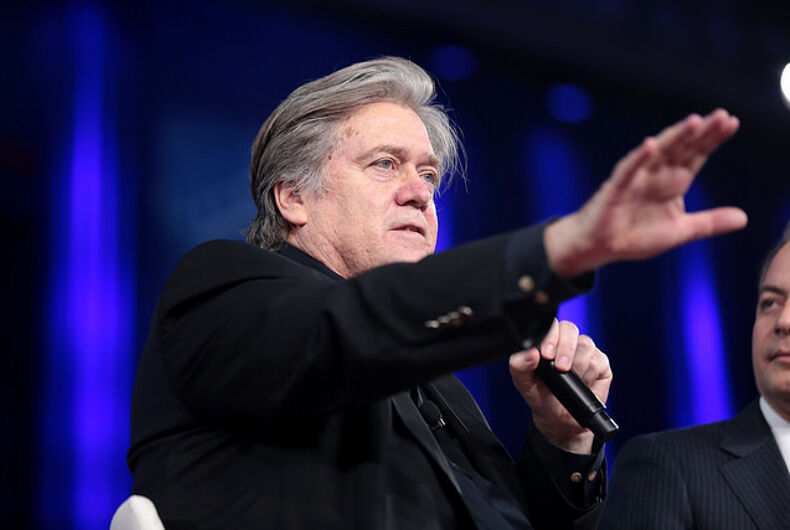 Steve Bannon may be out at the White House, but don't expect him to disappear. Photo: Gage Skidmore on Flickr

Just before taking a position with the Trump administration, Steve Bannon attempted to infiltrate Facebook.

According to emails obtained by BuzzFeed News, the former White House chief strategist took a tip from Chris Gacek of the anti-LGBTQ Family Research Council that the company was hiring, suggesting it might present an opportunity to gain inside access.

Gacek, a former congressional staffer who serves as the senior fellow for regulatory affairs for the Family Research Council, alerted Bannon that Facebook was looking for a public policy manager, to be based in Washington, D.C., for its WhatsApp messenger.

“This seems perfect for Breitbart to flood the zone with candidates of all stripe who will report back to you / Milo with INTEL about the job application process over at FB,” he wrote.

Milo being Milo Yiannopoulos, the former senior tech editor at Breitbart, who was forced to resign after making comments downplaying child sexual abuse.

Bannon forwarded the email on to Yiannopoulos, asking him to “get on this.” Yiannopoulos then forwarded the message on to a group of contracted researchers, one of whom said it would be difficult to pull off without getting discovered.

Facebook has seen itself grow increasingly politicized ever since the 2016 presidential campaign, taking heat from both sides of the aisle.

Conservatives criticize the company for what they see as a liberal leaning, especially after reports emerged from former staffers claiming they had been hiding right-leaning stories from the site’s trending feature.

Progressives, on the other hand, are upset that Facebook didn’t do more to stop Russian hackers from setting up fake profiles to spread anti-Clinton stories, as well as the purchasing of around $100,000 worth of ads to likewise attempt to sink the Democratic candidate.

Facebook declined to comment to BuzzFeed on the story. None of those involved in the scheme agreed to speak with the publication, either. Their plan was obviously unsuccessful, as the job ended up going to Christine Turner, who previously worked in the Obama administration, after helping to get him elected.